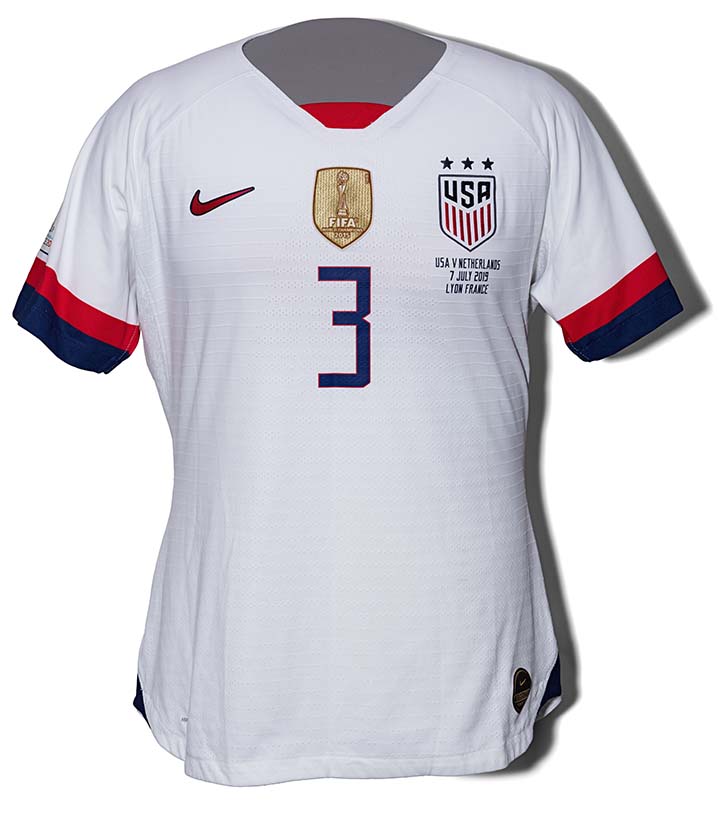 The Smithsonian’s National Museum of American History will open “We Belong Here” June 23 to coincide with the anniversary of Title IX. Marking the five decades of the federal legislation signed into law by President Richard M. Nixon, this 30-foot display case spotlights three athletes’ stories while an immersive graphic treatment adds to the larger narrative of the struggle for equal opportunity in sports, which began long before Title IX took effect in 1972.

Through three sports figures, this case examines some of the more contemporary issues in sports, including pay equity, mental health and participation by non-binary and trans athletes. A key object represents each athlete’s history-making story: Naomi Osaka’s 2020 U.S. Open Tennis Championship racquet; the 2019 U.S. National Soccer team jersey worn by the U.S. Soccer Player of the Year, Samantha Mewis, during the 2019 World Cup victory; and a T-shirt that skateboarder Leo Baker, a trans, non-binary athlete, made to publicly express their identity in 2019 after making the inaugural U.S. Olympic Skateboarding team—but because they wanted to stay true to their identity, Baker decided not to compete for the women’s team.

Open through winter 2023, the display case’s mural, graphics and links to digital content expand the narrative with additional accomplishments in sports such as skateboarding, hockey, fencing, tennis and gymnastics as well as hard-fought struggles, such as Dorothy Eda Hehnke who, in the 1920s, played high school basketball in Nebraska until 1926 when the state outlawed girls play. That ban was not officially lifted until Title IX, over 40 years later.

“Title IX was not intended to transform sports, but it did,” said Jane Rogers, associate curator in the museum’s Division of Cultural and Community Life. “We hope visitors will discover each athlete’s struggle and determination as they bravely asked, ‘What needs to change?’ and to also see how the law is continuing to evolve.”

The museum partnered with the Smithsonian Digitization Program Office to create 3D experiences based on athletic gear from the collection relevant to the story of sports and Title IX. Audiences can interact with Mewis’ jersey, Baker’s chest binder and other uniforms and tennis dresses belonging to key figures pictured on the display’s accompanying mural, including Dominique Dawes’ Olympics leotard, Althea Gibson’s tennis outfit and an All-American Girls Professional Baseball League dress and bloomers worn by Joyce Westerman, who played for the Peoria Redwings. Users can explore the annotated 3D garments on their own, take guided tours and even place the garments in their homes through augmented reality. There is a full collection of the 3D costumes and a site established for costumes featured in the “Girlhood (It’s complicated)” exhibition currently on view in the museum.

Through incomparable collections, rigorous research and dynamic public outreach, the National Museum of American History seeks to empower people to create a more just and compassionate future by examining, preserving and sharing the complexity of our past. The museum, located on Constitution Avenue N.W., between 12th and 14th streets, is open daily except Dec. 25, between 10 a.m. and 5:30 p.m. Admission is free. The doors of the museum are always open online and the public can follow the museum on social media on Twitter, Instagram and Facebook. For more information, go to https://americanhistory.si.edu. For Smithsonian information, the public may call (202) 633-1000. social media on Twitter, Instagram and Facebook. More information is available on the museum’s website.