12 kids who helped a doubting public accept the smallpox vaccine

Each year in August, National Immunization Awareness Month provides an opportunity to highlight the value of immunization across the lifespan. Activities focus on encouraging all people to protect their health by being vaccinated against infectious diseases. — Centers for Disease Control

Thirty-five years have passed since the 33rd World Health Assembly declared the world free of smallpox, an infectious disease that had plagued humankind for most of written history. This momentous achievement was the result of a massive global eradication campaign begun in the late 1960s, but its real beginnings can be traced back much further—to a medical discovery made in the English countryside, which spread across the Atlantic and to the small towns of the new republic. The following is a small piece of evidence of this long and rich history. 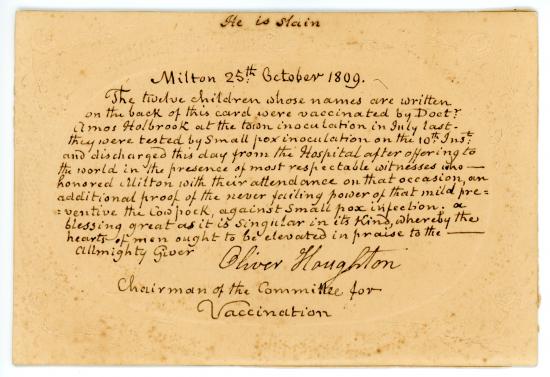 This unassuming 3 x 5 inch card in the collections at the National Museum of American History attests to a remarkable event that took place over two hundred years ago in a small town outside Boston. On October 25, 1809, in Milton, Massachusetts, twelve children were released from quarantine after fifteen days of close observation for any sign of smallpox infection. This may not sound unusual for a time when smallpox epidemics were a part of life, but these children had been purposefully inoculated with virulent smallpox matter in order to make a public test of a new medical discovery—vaccination.

The discovery had been made over a decade earlier by Edward Jenner, a country doctor in Gloucester, England. In 1798 he published a pamphlet entitled An Inquiry into the Causes and Effects of the Variolae vaccinae, a disease discovered in some of the western counties of England, particularly Gloucestershire and Known by the Name of Cow Pox. The booklet described his successful experiments using inoculation with cowpox to provide protection from the more serious disease smallpox. Jenner's method was named "vaccination," referring to the medical term for cowpox, Variolae vaccinae, and the Latin vacca, meaning "cow." Vaccination provided a potentially much safer alternative to the older practice of variolation, in which immunity was conferred by deliberately infecting a person with a small dose of smallpox.

As word of the vaccine's effectiveness spread, Jenner supplied cowpox vaccine matter to doctors throughout England. In 1800 vaccine material reached the United States through Benjamin Waterhouse, a professor at Harvard Medical School. Acceptance of vaccination did not come easily, and many members of the medical profession and the church opposed a method that introduced an animal disease into humans. In 1802 Waterhouse felt obliged to extol the virtues of the cow in an attempt to persuade the Boston Board of Health to set aside its objections to the "contemptible origin" of the vaccine. "The earth maintains not a more clean, placid, healthy, and useful animal than the Cow," he appealed. "She is peculiarly the poor man's riches and support. From her is drawn, night and morning, the food for his ruddy children; […] every part of her has its particular uses in commerce and medicine. On these accounts she is an [sic] useful, though invisible wheel in the great machine of state." 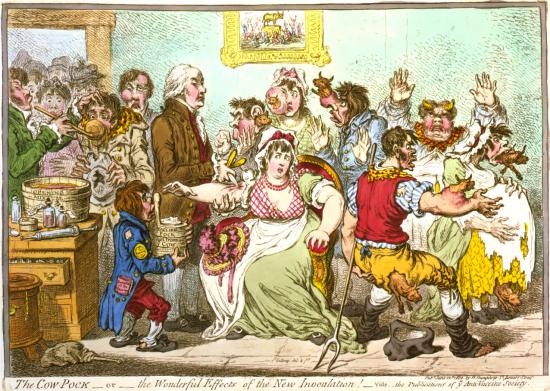 Whatever their attitudes toward cows may have been, in 1809 the citizens of the town of Milton, Massachusetts, became part of the first municipal effort in the United States to offer free vaccination to all inhabitants. Over three hundred persons were inoculated during a three-day campaign in July. Following this program, the town leaders took an unusual step—they decided to hold a public demonstration to prove without a doubt that cowpox vaccine offered protection from smallpox. On October 9, 1809, twelve children, selected from those vaccinated in July, were inoculated with fresh, virulent smallpox matter by Dr. Amos Holbrook and witnessed by eighteen town members. The children were confined to a single home for fifteen days and on October 25 were discharged with no sign of smallpox infection.

Each child received a personalized certificate pronouncing them a living testament to the "never failing power of the mild preventative the Cow Pox," "a blessing great as it is singular in its kind." Several other small certificates were produced to commemorate this remarkable demonstration, including the one now in the museum's collection. The names of the twelve children subjected to the vaccine test are inscribed on the back of the card: 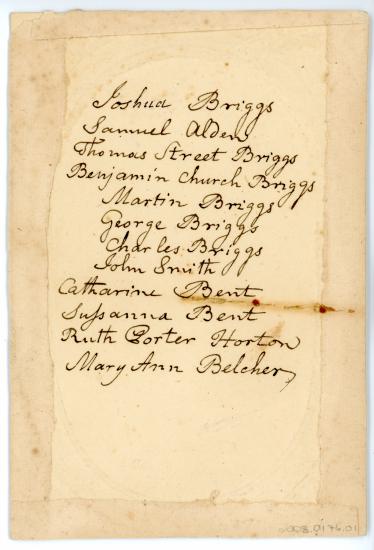 Milton's councilmen published a detailed account of the vaccination experiment and sent a copy to the officers of every town in the state, as well as to Governor Christopher Gore, a proponent of vaccination. In 1810 the State of Massachusetts passed the Cow Pox Act directing every town, district, or plantation, within the Commonwealth, to provide for the vaccination of their inhabitants.

The world is now free of small pox—a remarkable global achievement that owes a small debt to the citizens in a little town in New England in the early years of our republic.

Diane Wendt is a curator in the Division of Medicine and Science at the National Museum of American History. She has previously blogged about what it was like to survive rabies 100 years ago.