The cosmos in your living room: Spitz Junior Planetarium and 1960s stargazing

On November 17 and 18, I'll be in my backyard hoping for clear skies as the Leonid meteor shower lights up the sky. Here in the museum's collections, we also have interesting sights for astronomy fans to behold, including various telescopes and astronomical devices. One of my favorites is the Spitz Junior Planetarium made by the Harmonic Reed Corporation in the mid-1950s. 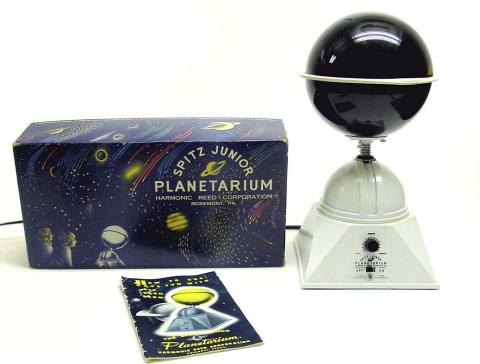 This Spitz Junior Planetarium was designed for elementary school children. During the early stages of the Cold War, at the start of the space race between the United States and the Soviet Union, the United States made a push to get children interested in science. While large, community planetariums with professional staff were open to the public, distance and cost often made traveling to these sites prohibitive for many people. Personal planetariums, on the other hand, made learning about the solar system and constellations convenient and accessible. They brought the stars into children’s homes for easy viewing and let children teach others about astronomy.

The planetarium projected stars and constellations for each month and was adjustable for latitude. The instructions included four sections divided by season. The planetarium was also adjustable for both the northern and southern hemispheres, so a kid could show their family when the stars rise and set throughout the year. With winter approaching, the model showed visible stars such as Gemini and the constellation Leo. By locating Leo indoors, a child could then presumably find the constellation in the night sky and look for the Leonids, a meteor shower emanating from Leo during November. (NASA has great tips for watching meteor showers.) 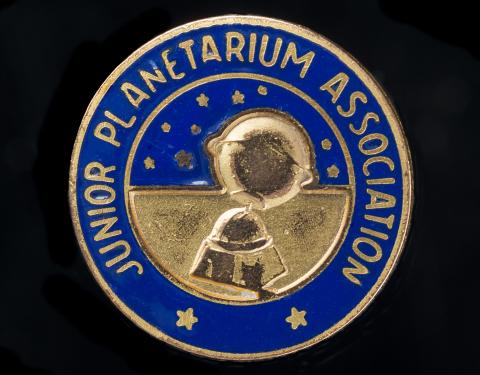 Children interested in astronomy could get a Junior Planetarium Association pin, also made by the Harmonic Reed Corporation. For a small fee, a child joined the club and received a pin, as Robert Ware, Jr., did in the mid-1950s. Mr. Ware donated his pin to the museum after seeing the planetarium in the Smithsonian's online collections catalog.

This pin shows a social aspect of presenting science to young people in the mid-1950s. In addition to collecting objects related to science and technology, we also collect items that show how people used that technology. We were excited when Mr. Ware contacted us, because his pin gave us a window into a previously-unknown aspect of the planetarium. It shows that the presentation of science to young people in the mid-1950s also had a social dimension. The existence of clubs for children, sponsored by the companies that made products for that same audience, helps us better understand these dynamics.

As I watch the Leonids this year, I'll be thinking of the children in the 1950s and 1960s who knew where to look with the help of their Spitz Junior Planetarium.

Connie Holland is a project assistant in the Division of Medicine and Science.