Fourscore and seven years ago

With that now-iconic phrase President Lincoln began his Gettysburg Address—a dedication of the cemetery in Pennsylvania and a statement about the larger significance of the Civil War. Despite Lincoln’s assumption that “the world will little note, nor long remember what we say here,” the Gettysburg Address is now one of the most famous—and considered one of the most eloquent—speeches in American history. It is hard to believe there are less than 300 words in the entire speech—in fact, the president was finished speaking before many of the spectators that day (November 19, 1863) even realized that he had begun.

When the National Museum of American History reopens on November 21, one of five known drafts of the Address will be on display in the new Albert H. Small Documents Gallery. This copy, the last known to have been written in Lincoln’s hand, is normally kept in the Lincoln Bedroom at the White House—a place that few people will ever visit. With the generous support of Mrs. Laura Bush, the White House is loaning this copy of the Gettysburg Address to the museum for a very limited public viewing (through January 4, 2009). 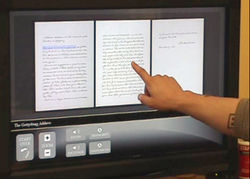 We’re hard at work here in the museum’s new media office creating an interactive experience that will be available in the gallery as well as for a much wider audience on the Web. The interactive will provide you with a chance to get up close and personal with the document. High resolution images give you a sense of “touching” the artifact as you zoom in and select “hotspots” revealing additional information. For example, touching the opening phrase “Fourscore and seven years ago” will open up an explanation about how these words referred to 1776 and the signing of the Declaration of Independence. Want to know why this copy is signed by Lincoln? Touch his signature and learn that Lincoln wrote this copy in March 1864 for publication in an anthology, Autograph Leaves of Our Country’s Authors. At the publisher's request he gave the address a title and signed his full name.

Each time I see the work in progress, I’m moved by how close I can get to Lincoln’s own handwriting. I’m looking forward to giving visitors the same opportunity to have an intimate connection with the speech that so eloquently captured an important moment in history and that still has real power for us today.