Yesterday’s ceremony to dedicate the new Star-Spangled Banner gallery and celebrate the reopening of the museum was, in many ways, a paean to history: those who have made it, those who have preserved it, and those who immerse themselves in it.

Honored guest President Bush set the tone by paying tribute to those whose words or actions, by virtue of their greatness, have acquired a meaning that surpasses the scope of their original intent: from Francis Scott Key’s poetic description of his feelings at the sight of a “star-spangled banner” flying over Fort McHenry after a night of battle; to Abraham Lincoln’s brief dedication of a Civil War battlefield that ranks, in the view of Mr. Bush and many others, as the greatest Presidential speech of all time; to the brave act of four individuals who insisted on their right to sit at a segregated Woolworth lunch counter in Greensboro, North Carolina.

Smithsonian Secretary G. Wayne Clough, Museum Director Brent Glass, and others gave thanks and praise to the many dedicated supporters and staff who further the mission of the museum. After laboring so hard down in the trenches to make this moment possible (not to mention all the rest of the 364 days a year that the museum is open to serve the public), I’ll confess that it’s nice to be reminded that, for so many of us, preserving and interpreting America’s cultural heritage is a labor of love.

Finally, board member and superstar historian David McCullough reminded us in eloquent and passionate terms why institutions like the National Museum of American History matter. He referenced another alpha-historian and former museum director Daniel Boorstin, who said, “Trying to plan for the future without a sense of the past is like trying to plant cut flowers.” Visiting the museum and seeing the “real stuff” of history, he argued, is an excellent way to not only cultivate a sense of the past, but understand the critical issues we face in our own time. 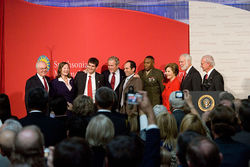 Five new citizens of the United States pose with President and Mrs. Bush, Smithsonian Secretary G. Wayne Clough, and Roger Sant, Chairman of the Smithsonian Board of Regents.

But perhaps the most concrete reminder of the ongoing vibrancy of the American experience, and the high point of the program, was a short naturalization ceremony conducted by the head of the U.S. Citizenship and Immigration Service for five new citizens of the United States. Watching these five—hailing from countries and continents around the world—be embraced figuratively by the crowd in attendance, and literally by President and Mrs. Bush, one couldn’t help but feel that this celebration of diverse experience coupled with a sense of shared national purpose was a perfect symbol for the kind of place we want our museum to be. As our director said to them and to all: Welcome to your National Museum of American History.

You can watch an archived webcast of the dedication ceremony here.