The First Ladies at the Smithsonian: more than dresses 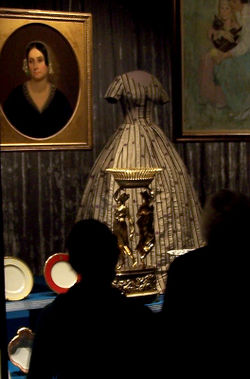 If a first lady has two terms, does the Smithsonian collect gowns from both inaugurals’ balls?
Although Ida McKinley’s second inaugural ball gown and three gowns worn by Eleanor Roosevelt to inaugural festivities are part of the collection, the Smithsonian usually collects only the gown from the first inaugural ball. The second gown is often exhibited at the presidential library.

Why aren’t all of the gowns on exhibit?
Light, climate, and gravity are all harmful to fabric. Over time, they have damaged the gowns. There are some gowns that can no longer be exhibited because they were too badly damaged by their years on display. Other dresses are rotated on and off display in order to keep them in good condition.

Are the gowns altered?
Each mannequin is custom-made to fit and support the gown. The Smithsonian does not alter the gowns.

Do you exhibit reproductions of the gowns?
The Smithsonian sometimes reproduces portions of a gown to complete it for exhibition but does not exhibit gowns that are entire reproductions.