At one of the museum’s reopening events, I perused the new Star-Spangled Banner Gallery for the first time. I was especially excited to see the new interactive flag. I had heard a lot about this feature: it is a large table with a very hi-res image of the flag projected on to it and tidbits of information easily available for visitors. It was a lot of fun to play with, and I was really enjoying it when a woman came up to me and asked me to explain what it was. 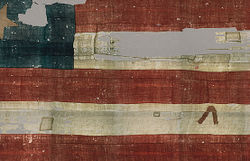 This detail photo shows the "A" that was reportedly sewn onto the flag by Louisa Armistead, widow of the 1814 commander of Fort McHenry.

I talked about it, modeled how to use it, and also mentioned that I’ve been working on several lesson plans about the flag for the new Web site. Then we spoke some more, and she casually mentioned that she is a descendant of the Armistead family.

Lieutenant Colonel Armistead commissioned Mary Pickersgill to sew the Star-Spangled Banner, and his descendants ultimately gave the flag to the Smithsonian Institution. Louisa Armistead, widow of the commander of Ft. McHenry, sewed an “A” for “Armistead” into the flag, and I got chills up my spine as I helped this Armistead descendant find the “A” that stood for her family!

Jenny Wei is an education specialist at the National Museum of American History. She’s very excited to have visitors (famous and yet-unknown) returning to the building.