Being a part of history

Wow. On Inauguration Day they came to Washington to witness history being made, and we thought we’d planned it all. We knew that Tuesday’s visitors would have a different agenda from those coming on Saturday, Sunday, and Monday, and so we’d adapted accordingly. We’d developed a spoken-word program, created a slideshow presentation, and hired authentically costumed re-enactors to mingle. Security and maintenance forces were at the ready, the shops had ordered great souvenirs, the cafes promised to have plenty of hot coffee by 8 a.m. Staff wore comfortable shoes, walkie-talkies, and bright smiles.

On Tuesday, the doors swung open, and people came, and came, and came. Cold, tired, seeking bathrooms and warmth, they filled the museum to capacity by 9:30 a.m. and officers had to pulse in groups as the early birds left to rejoin friends on the National Mall. Official reports state that we had a staggering 42,354 visitors; a usual Tuesday in January brings in a sixth of that. For safety’s sake, our security officers added to their regular duties of bag-checking by waking up people sprawled out asleep on the floors, directing them to places that were more out of harm’s way. Children and older folks were allowed to break into the (looooooong) bathroom lines. Everyone, staff and visitors alike, was extremely polite and cooperative, making extra efforts to help.

There is a strong Smithsonian tradition for welcoming visitors during these mammoth gatherings on the National Mall and opening the museums for the public. In 1968, during the Poor People’s March, thousands camped on the Mall. Some SI officials advised closing, but then-Secretary S. Dillon Ripley insisted instead that the museums remain open even later than usual. “How often are these people going to be in Washington?” Mr. Ripley asked. 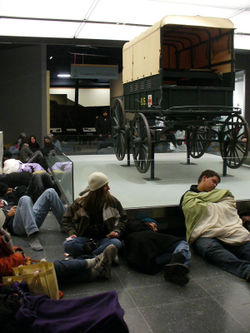 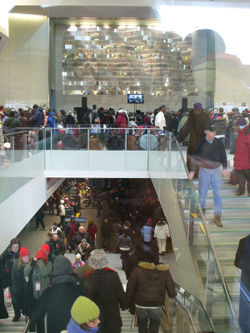 All morning long people filled the hallways and gathered near the (dark) TV screens. Our well-written and beautifully-acted “Inaugural Moments” spoken-word programs were politely applauded. We turned the screens on to show our “Inaugural Images” slideshow—a thoughtful, well-researched and designed presentation of historical photos and inaugural fun facts. Three repeats of that and the chants went up, “Turn on the TVs!” “We want it live!”

The people had spoken; the reason they wanted to be here was to see history in the making, not the history we’d planned to present. We turned on the TVs at 11:30 a.m. Just before noon, many visitors decided to rejoin the throngs on the Mall and by 11:55, a lot of the museum staff dashed out into the cold to be among the almost 2 million fellow witnesses to the ceremony on the jumbotrons, whooping and hollering and praying and crying and hugging and waving flags, no longer apolitical government employees but very, very happy American citizens. History was made, and we were a part of it all.