One of my favorite authors is the late Douglas Adams, whose Hitchhiker’s Guide to the Galaxy series expounded the “interconnectedness of all things.” As a historian at the museum’s Lemelson Center, my research often reinforces Adams’s belief in surprising ways. Take this story about Nevada statehood that I came across while doing some research on communications technologies. 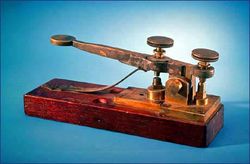 Shortly before the presidential election of 1864, voters in Nevada accepted a state constitution for admission to the Union as a free state. Time was short for President Lincoln to proclaim Nevada the newest state before his bid for reelection, and he needed those extra Republican votes. So when neither copy of Nevada’s constitution (one sent by overland mail, and one by sea) had arrived in Washington by October 24, Governor James W. Nye turned to the “Victorian Internet”—the telegraph. The 16,543-word constitution was relayed by telegraphers from Nevada to Chicago to Philadelphia and then to Washington. It took two days to complete the transmissions, cost an amazing $4,303.27, and at that time was the longest telegram ever sent. President Lincoln issued the proclamation of statehood for Nevada on October 31, right before winning reelection.

As we reflect on the inauguration of our new president, who is himself an advocate for cutting-edge communication technologies, I think Douglas Adams (and perhaps Barack Obama) would appreciate the interconnectedness of the telegraph’s invention and the preservation of the Union.

Joyce Bedi is the senior historian for the Lemelson Center for the Study of Invention and Innovation at the National Museum of American History.