I can’t wait to see what Barack Obama does to fulfill his campaign pledge to spur innovation and improve American competitiveness in business and technology. But, since the beginning of the Republic, Americans have expected their political leaders to support and stand for innovation. A number of technophile chief executives have occupied the White House, starting with George Washington, a strong promoter of roads, canals, and military technology, and continuing with technical experts and engineers such as Herbert Hoover and Jimmy Carter. But, what about presidents as inventors?

In that department, Thomas Jefferson has no rivals. Not only was he one of the fathers of the U.S. patent system, he was an estimable inventor in his own right. On display in our exhibit, The American Presidency: A Glorious Burden are his improved polygraph, which creates simultaneous copies of a writer’s manuscript, and a portable lap desk of his own design, on which he penned the Declaration of Independence. Despite his inventive bent, he was openly skeptical of patenting, because he believed it undermined everyone’s right to invent, a violation of his deeply held democratic values. You might say he was a forerunner of today’s “open source” advocates, though for somewhat different reasons. 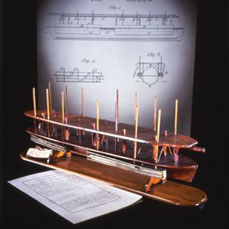 Our sixteenth president, whose two hundredth birthday we celebrate this year, had no such compunction about patenting. A staunch upholder of the patent system, the mechanically-inclined Abraham Lincoln in fact was the only U.S. president ever to hold a patent. One of the treasures of the National Museum of American History is the patent model he submitted for buoying riverboats over the shoals that obstructed the shallow waters of western rivers. Lincoln received patent no. 6469 in May 1849, but never attempted to market his invention. The patent model is part of the museum’s new Lincoln bicentennial exhibition,Abraham Lincoln: An Extraordinary Life.

While we may not expect him to add inventing to a daunting to-do list, it will be fascinating to see whether President Obama, who has publicly identified himself with Lincoln, remains as strong an advocate of inventors and invention in pursuing his ambitious technological agenda.

Art Molella is Director of the Jerome and Dorothy Lemelson Center for the Study of Invention and Innovation at the National Museum of American History.