It recently came to my attention that our museum is included, under a vaguely masked name, in the video game Fallout 3. The game is set in a post-apocalyptic Washington, D.C., in the year 2277 and includes variations of other famous landmarks, like the Jefferson Memorial and our easy-to-recognize Metro system. 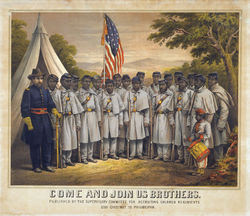 I don’t particularly like thinking of “post-apocalyptic” anything, let alone my office and my city! But it is really cool to think that even in the year 2277, the artifacts in our museum could have powerful meanings for people. Apparently, in the game some of the artifacts from our Abraham Lincoln collection can be sold for big bucks to people who want to remember or want to forget our 16th president. I don’t play the game, so I can’t tell you where to find the artifacts in 2277. But I can tell you where to find some of them until 2011:

One image in our “Abraham Lincoln: An Extraordinary Life” exhibition, which is shown in the context of Lincoln issuing the Emancipation Proclamation, is a copy of a Civil War recruitment poster. This image was targeted towards newly freed African-Americans and encouraged them to join the Union forces. Other recruitment posters (for the Confederacy and the Union) are in “The Price of Freedom: Americans at War” exhibition.

Lincoln was 6’4”, which was very tall for his time, but he made himself stand out even more by wearing tall top hats. It’s the first and last thing that visitors to the Abraham Lincoln exhibition see, but don’t even think about trying to run off with it to sell it—it’s one of the most treasured objects in the Smithsonian Institution.

The game includes several different weapons, and one of them is tied to a museum artifact. The gold-mounted, engraved Henry Presentation Rifle was given to Lincoln in 1862 by the New Haven Army Company. This being a museum artifact, you aren’t allowed to use this one, even to kill ghouls!

Lastly, while we aren’t showing a wanted poster for the Abraham Lincoln conspirators, the exhibition does include the shackles and hoods that they wore while imprisoned. The hoods are a very grim reminder of what happened to the eight conspirators. The display is striking and one of my favorite cases in the museum!

Jenny Wei is an education specialist at the National Museum of American History and loves any method for getting people curious about history.