Forty-two. That’s the number of babies my mother delivered during her short career as a medical doctor during the 1950s. It was a time when women quit working once they got married, as my mother did before my older brother was born. But she was very proud of that number, and when I was still playing with dolls she used to tell me stories about those babies. She didn’t protect me from the harsh realities of childbirth either. She told me about all the babies, including the ones who didn’t survive or had to stay in the hospital living in incubators before they could be sent home. 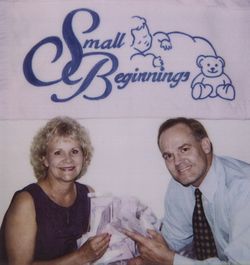 Neonatal nurse and inventor Sharon Rogone with her business partner, Austin Webber, around 1990.

Those stories captured my imagination, which is perhaps why I was fascinated to learn about neonatal nurse and inventor Sharon Rogone. Like my mother, Rogone put family before career. In her case, she came into nursing after raising her children. She earned degrees as a licensed practical nurse in 1976 and as a registered nurse in 1980 from San Bernardino Valley College. In the late 1980s, Rogone was working in the neonatal intensive care units (NICU) at St. Bernardine hospital and San Bernardino County Hospital in California.

Motivated by her experiences trying to save premature infants, Rogone began inventing and founded her own medical supply company, Small Beginnings, Inc., in 1997. Her first patent (5,613,502) was for the Bili-Bonnet, a phototherapy mask that protected the eyes of infants receiving light therapy for jaundice. Other inventions include the Bebeonker (an oral/nasal suction device) and Cuddle Buns diapers (to prevent hip dysplasia).

I was drawn to Rogone’s story personally, but as a historian the opportunity to document this inventor was equally compelling. The history of the NICU has yet to be written, and here was a story about a neonatal nurse whose career neatly coincides with the evolution of the neonatology profession itself. The first NICU was founded at Yale-New Haven Hospital in 1960, the same year that Rogone graduated from high school. By the time she finished her nursing degrees and began working in hospitals in the mid-1980s, a few larger facilities had dedicated NICUs, and many more were simply creating makeshift units wherever a little space could be found. Today nearly all children’s hospitals and many large general hospitals have dedicated NICUs.

In addition, women inventors are underrepresented in the historical record, and at the Lemelson Center we are working to correct this imbalance by locating and acquiring the records of women inventors for the Smithsonian national collections. So in the winter of 2007 I headed out to Hesperia, California, with archivist Alison Oswald and curator Judy Chelnick. It was cold for California, but we were greeted warmly by Sharon Rogone and her business partners (who happen to be her family and best friends) and proudly shown around the company’s production and distribution facility. Over several days we were able to collect artifacts and business records and also record oral history interviews with Rogone, her husband Phil, and business partner Ken Croteau.

The Records of Small Beginnings, Inc., collection is, well, small. Covering the period 1986 to 2006, it includes articles of incorporation for the business, correspondence, corporate-identity branding, product information, sales records, patent and trademark files, photographs, journal articles, magazine and newspaper clippings, and oral history interviews. It is a rich source of information about neonatology, invention, and entrepreneurship (see the Small Beginnings finding aid for details). If my mom were around today I would enjoy showing her the Small Beginnings collection. She would be pleased to know how far women in the medical profession (and premature babies) have come.

Maggie Dennis is a historian at the National Museum of American History’s Lemelson Center for the Study of Invention and Innovation.