I had the chocolate symposium (held a few weeks ago at the museum) and Women’s History Month on my mind when I came across this image from the museum’s photo history collection of glass plate negatives by Underwood & Underwood. Thanks to a morning spent with ProQuest (thank you Smithsonian Libraries!) I was able to learn a bit about the remarkable woman who is pictured. I’m guessing that readers who know something about Chicago history are going to fill in the gaps! 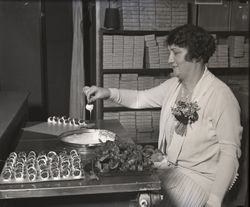 Here’s what I learned: Mrs. Ora Snyder (nee Hanson) of Chicago was the mother of several children when her husband took ill in 1909 and had to quit his job. To make ends meet, she began making candy and selling it to the children down the street after school. She very quickly took her sweets to a different location in “the Loop” (Chicago speak for the historical downtown district) where her business really took off. By the time this photograph was made in 1925, she owned eight shops. In 1931, she was the first woman elected as President of the Associated Retail Confectioners of the United States.

In a Chicago Daily Tribune article from December 20, 1942, she explained how war rationing affected business. “Mrs. Ora Snyder said her stores were 1000 orders behind and purchases are being limited to five pounds per customer. Even using more honey and maple sirups [sic] . . . the company cannot meet the vastly increased demand.” She explained, “People, because of sugar rationing and chocolate shortages, have fewer sweets at home and are turning to candy to fill the need.”

After the war, when supplies were more accessible, she continued expanding her business. When she passed away at age 72 on July 18, 1948, she owned sixteen shops, one of which was a seven-story building. In another Tribune article, in 1959, son-in-law Seymour W. Neill was running the company of twenty-four shops, requiring some 380,000 pounds of sugar and 350,000 pounds of chocolate per year. He’s quoted as saying, “One thing that has become almost a lost art amid the mechanization is hand chocolate dipping. Snyder’s still employs about 20 who do hand dipping but they’re hard to find.”

If you have stories about Snyder’s and the woman who turned a small kitchen-based business into a Chicago-based chain, please share them in the comments.