March 28th is the 30th anniversary of America’s worst accident at a civilian nuclear power plant: the melting of half the fuel in one of two nuclear reactors on Three Mile Island in the Susquehanna River near Harrisburg, Pa. 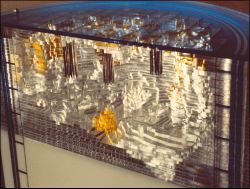 Half of topographic scale model of the upper third of the TMI-2 reactor’s destroyed core, constructed on the basis of data gathered and analyzed in 1983 by the Idaho National Engineering and Environmental Laboratory’s sonar survey team.

Serious though that accident was for the reactor itself – more serious than anyone surmised at the time; so serious as to be beyond repair – most of the radioactivity released from the reactor’s core was contained within the reactor building, and, in all probability, no one received a harmful amount of radiation.

For the 25th anniversary of that frightening happening, the museum mounted a small exhibit displaying part of the ‘sonar’ equipment that was created at the Idaho National Laboratory following the accident for the purpose of discovering just how extensive the damage to the reactor’s core had been. The exhibit included a Lucite model of the destroyed core (see photo) that was constructed from the data produced by lowering the sonar probe into the water-filled reactor.

Though the exhibit remained on display for only a few months, the sonar probe and the Lucite model wait patiently in the storage room of the museum’s Modern Physics Collection for their next opportunity to appear in public. Meanwhile, on our Web site, the virtual visitor will find quite a detailed account of what happened inside the reactor during those anxious hours, and how, over several years, the mystery of just what did happen in there was unraveled.

Paul Forman and Roger Sherman are the curators of the Modern Physics Collection in the Division of Medicine and Science at the National Museum of American History.