What on earth is a Stanhope?

One of my first tasks as a new intern in the photographic history department was to research and write about Stanhopes—what they are, where the name came from, who invented them. I spent about two days finding out everything I could about the objects. I love how one topic can branch out into so many! For example, I started with the name—which comes from the 3rd Earl of Stanhope. He had a daughter known for her world travels in the 1800s. Of course, his daughter has nothing to do with what we know as Stanhopes but I love how connections in research can take you anywhere. I learned a great deal about supporting characters such as Sir David Brewster and John Benjamin Dancer, and I even learned about the fascinating use of the Pigeongrammes. And all this in my third week here! I love how digging deep when learning about a new topic can open up a whole new world. 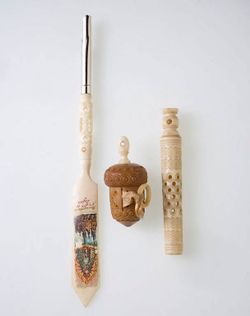 Three examples of a traditional Stanhope including an acorn-shaped tape measure and a pen. 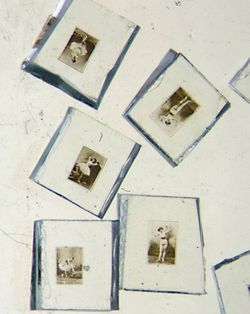 Examples of the tiny images found attached to the lens in a Stanhope.

So, what is a Stanhope? Here’s what I learned: Novelty souvenirs that became popular during the 19th century, these objects (ranging from pens to sewing accessories to jewelry) are unique because of the tiny hidden image placed somewhere inside the object. The image can be found by holding the object up to the light and looking into a tiny hole where the magnified image becomes visible. These images range from landscapes to portraits and are about 1/10th an inch in diameter and 1/4 an inch long. The term “Stanhope” comes from the inventor of the Stanhope Lens, Lord Charles Stanhope (1753-1816) (Note: Lord Charles died before photography had been invented). The name “Stanhope” is somewhat of a misnomer because the actual lens used in the objects known as “Stanhopes” is not actually a Stanhope lens. It is actually called the Codding Magnifier, invented by Sir David Brewster (1781-1868).

In 1839, John Benjamin Dancer (1812-1887) attached a microscope lens to a daguerreotype camera and produced microphotographs. This new technology influenced Rene Dagron (1819-1900), a portrait maker in Paris, to invent the Stanhope by affixing a micro-image to a lens. After these new developments, Dagron manufactured novelties with tiny photographs in them beginning in the early 1860’s. Eventually Stanhope novelties began to lose their popularity as souvenirs and the last true Stanhopes were made in 1972 by Roger Reymond.

My favorite part of this research was actually handling artifacts. I had the incredible opportunity of sorting through the museum’s Stanhopes. Seeing the items I was researching firsthand was fun and a vital part of understanding what I was writing about. Plus, it is interesting to see what people in the 1800s thought of as a charming souvenir—in the collection I found jewelry, letter openers, and even a tiny tape measure!

Ciara Teegarden is an intern with the Photographic History Collection at the National Museum of American History.