When history comes to life

Like many of you, I love the idea of inanimate objects having a secret life. The people leave, the lights go out, the door closes and then— magic, stuffed animals, toy cowboys, and Teddy Roosevelt come to life. Hollywood is particularly good at animating the inanimate, but what you might not know is that we have a little magic of our own going on right here in the National Museum of American History. Everyday throughout the spring and summer, you can watch one of our talented actors bring a featured object to life through engaging and thought provoking museum theater pieces. 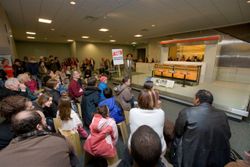 One such program is Join the Student Sit-Ins. This 20 minute “training session” takes place in front of the famous Woolworth Lunch Counter, a section of the very lunch counter where on February 1, 1960, four young African American college students quietly and courageously asked to be served at a “whites only” counter in Greensboro, North Carolina. This simple act of peaceful defiance led to a six-month protest that brought about the desegregation of the Woolworth lunch counter and inspired widespread sit-ins and boycotts throughout the country.

The object itself is unassuming; it is just a small section of a typical lunch counter. If you look closely you can even see pieces of old pink and green gum stuck on the bottom of the barstools. But when Xavier Carnegie, the actor who plays the fictional civil rights activist Samuel P. Leonard, steps between the audience and the lunch counter chanting, “Make America Great! Desegregate!” both the object and the audience begin to stir with life. Suddenly, through Xavier’s skilled hands and a sensitively written script, the object moves from just a backdrop to a principal character retelling a story of its own.

And when Xavier invites four audience members to sit on bar stools placed in front of the counter to practice the principles of nonviolent protest, and then asks you and the rest of audience to crowd in close and stare down the necks of those protesters, he gives you a little taste of what the Greensboro protesters endured—the jeers, the taunts, the shoving, and the hate. In that pivotal moment you look up and see yourself and your neighbor reflected in the mirror that hangs over the Woolworth Lunch Counter, and that is when you feel the real magic. That is the moment when history and the object come to life, and you get a little thrill of understanding and appreciation for the everyday people like you who bravely stood up in 1960 by daring to sit down.

Elisabeth Johnson is a special assistant for public programs at the National Museum of American History.