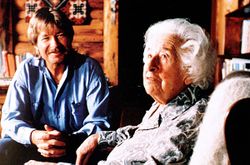 The hard-fought campaigns for environmental justice over the past century have involved community groups of vast diversity across the country. Nearly all of them have relied on the leadership, intelligence, and courage of women.

In recognition of the place of women in America’s environmental history, on Wednesday, March 18th, the museum’s involvement in the 17th annual Environmental Film Festival in the Nation’s Capital will be dedicated to that theme. The museum will join with the Smithsonian’s National Portrait Gallery to show two films by the acclaimed independent documentarian, Bonnie Kreps: “Don’t Fence Me In: Celebrating Women and Girls of Wyoming”; and “Arctic Dance: The Mardy Murie Story,” a biography of a woman who played a key role in preserving the magnificent wild and scenic landscapes of Alaska.

If you are visiting or live and work in Washington, I invite you to join us for this special screening, and for a discussion by Bonnie Kreps afterwards. If you are unable to attend, then join us in spirit, paying tribute to women who have made the world a richer and better place for us all.

In the meantime, let us hear from you. Who do you consider the women who have made great contributions to securing a healthier environment?

Jeffrey K. Stine is curator for environmental history at the National Museum of American History.