Don't let the screaming fool you...

When you approach the museum’s Stars and Stripes Cafe, you may hear blood-curdling screams. It’s not the food—really! The museum recently opened a new simulator ride area on the lower level across from the Cafe and that’s where all the noise comes from. My colleagues and I were curious about the rides, so four of us went down to check them out. If they had rides in your building how could you NOT try them out?!? 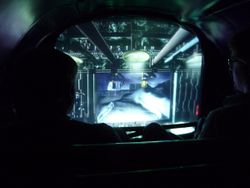 Our group ranged from steely-stomached theme park veterans to “can’t walk in a circle without getting nauseous” types. We opted to test three different experiences, the Glacier Run, the Astro Canyon, and the Grand Prix. Both Glacier and Astro are simulated roller coaster rides and Grand Prix is like Project Gotham with motion added.

The simulator staff members are really great. They gave us a “pre-launch” safety briefing which added to the excitement and prevented us from smashing our heads by trying to get out before the hatch opened all the way! The rides have rails to hold onto but no seat belts, so sit next to someone you like because you will be getting “cozy” as you slide around during the ride.

We all thought the rides had just the right amount of adventure; we had fun and no one tossed their cookies. I really enjoyed Glacier Run, mostly because of the awesome bluegrass soundtrack, which added another dimension to the ride. Like the slow trip up to the top of a roller coaster’s peak, the music built drama and suspense!

As we were getting ready to leave, a group of middle school students from Saratoga, New York, stepped out of one of the simulators and we asked them about their experience. They said it was definitely worth the $7 ticket and that they’d recommend it to friends. So a big thumbs up on the new simulators!

Carrie Kotcho is an education technologist at the National Museum of American History.