Eco-cities on the horizon

One of my favorite things in the museum’s Science in American Life exhibition is the “Ecology Now” poster commemorating the establishment of Earth Day in 1970. As Earth Day 2009 approaches on April 22, I find myself reflecting on Inventing for the Environment, a volume the Lemelson Center produced a few years ago. I do so in the conviction that its theme looms even larger today than it did when the book first came out. Countering the view that technology only disrupts natural processes, our book’s contributors focused on inventors and innovators who have devoted their imaginations to shaping a better environmental future. 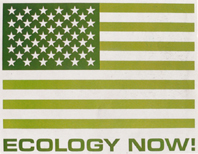 Today, the buzz is all about “sustainability,” with an emphasis on alternative energies, renewable resources, and carbon-neutral technologies. Sustainability, however, has taken on a whole new dimension with the rise of the eco-city concept. I say “concept,” because, although the idea has been around for at least a couple of decades, no eco-city has yet been fully realized.

As defined by the visionary urban ecologist Richard Register, eco-cities are designed to be in balance with nature. Actually they come in many sizes and flavors, including retrofitted derelict industrial areas and small eco-villages, as in the plans for “Bicycle City”—a particular favorite of mine. The most fascinating variety, however, are the attempts to build completely new cities on the principle of total environmental sustainability. Using the most advanced technologies (including some not even invented yet), these new cities are designed to be completely self-sufficient. Each will generate its own power, grow its own food, and recycle its water, while minimizing to near zero the output of waste, especially C02.

Two of the most extravagant projects currently on the books are Masdar in Abu Dhabi of the United Arab Emirates and Dongtan in China. Abu Dhabi is touting Masdar as the “greenest city on earth,” eventually a zero-carbon footprint town of 50,000 inhabitants and 1,500 businesses. Most spectacularly, the city is built on a plinth or platform, with all the infrastructure and transportation concealed beneath. Competing with Masdar for the title of the world’s first fully realized eco-city is Dongtan, about 25 miles from Shanghai. The city will produce its own energy through wind, solar, bio-fuel, and recycled waste, including human sewage.

Both projects pose formidable environmental challenges: The green city of Masdar sits in the middle of a desert and Dongtan on a major wetland. Their very concept raises a host of questions and issues, but the central one is this: How real are they? Some say they are exciting new directions, but others claim that, in the case of Masdar, the eco-city diverts attention away from Abu Dhabi’s petroleum industry, and, with Dongtan, China creates a fig leaf for its polluted metropolises. In the end, is ultimate sustainability really sustainable?