When I was a teenager, “America’s Funniest Home Videos” was one of the few TV shows my family could agree to watch together. Perhaps because of her training as a nurse, my mother typically viewed the program while peeking through her fingers, anticipating the next ski jump gone awry. Any time you saw a kid with something resembling a baseball bat you knew that someone or something (grandpa? the sliding glass door?) was about to get banged up. From mishaps at weddings to unfortunately-located dog poo, the show featured unrehearsed slapstick comedy in all of its glorious forms. 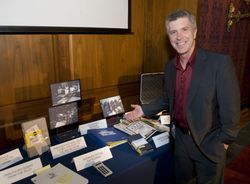 Comedy as a cultural form and feature of American life is documented in the museum’s growing entertainment collections, which include artifacts ranging from costumes to sheet music. Items from “America’s Funniest Home Videos,” a pioneer in comedic reality programming and the longest-running primetime show on ABC, became the latest addition to these collections in a special donation ceremony held on April 8.

One of the artifacts, a mammoth camcorder used to film the first winning video on the show, illustrates changes in technology over the past two decades. Despite the bulky and expensive VHS recording equipment that was available in the 1980s, the show received hundreds of entries in its first season and has received over 700,000 since. Think of all the hijinks and embarrassing moments now being captured via tiny cell phone cameras and broadcast to the world via the Internet. Today, an estimated 80 million people visit YouTube every month to watch scenes that aren’t so different from AFHV’s: lots of precocious babies and even a waterskiing squirrel.

Another donated artifact, an audience voting machine, helps us to trace the show’s influence on American popular culture. The reality-show-with-voting-competition format pioneered by AFHV nearly 20 years ago is now the foundation of some of today’s most popular television shows (can you say “American Idol”?). The idea of an interactive show where the audience decides the outcome—and the performances are put on by Americans from all walks of life—now seems commonplace.

During the donation ceremony, Creator and Executive Producer Vin Di Bona confided that the show never has to rely on a laugh track. As host Tom Bergeron pointed out, I think the show’s footage of human beings and their wacky behavior underscores the universal nature of slapstick. There’s a reason that nuns catching wedding bouquets and dachshunds with live firecrackers are funny. I don’t have the foggiest idea what that reason is but I dare you watch this clip reel from “America’s Funniest Home Videos” without at least one good belly laugh.