One of the benefits of working in the National Museum of American History is sometimes you run into your own history. The first time I stepped in to our electricity exhibit I saw fans and toasters that I recognized from my parents’ basement. Our soon to be reinstalled Taking America to Lunch exhibit of lunch boxes brought me back to the school cafeteria, as it does for so many people. 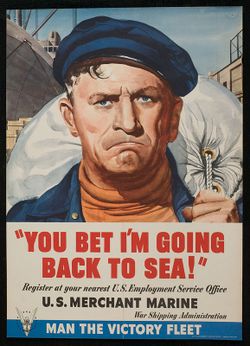 My most recent encounter occurred when I took a pre-opening tour of On the Water, a new exhibit about our country’s maritime history. Towards the end is a section about the Merchant Marines, an often overlooked branch of the military. My Dad was in the Merchant Marines during World War II, and as the exhibit says, “though not part of the navy, these ships delivered troops, supplies and equipment that won the war.”

My dad was one of those vets who did not talk much about his service until very late in life. Even then he just had a couple of favorite stories, particularly one about watching a torpedo soar under their ship because they had just off-loaded their cargo, so the ship was higher in the water than the Germans had calculated. Luckily my Dad was able to visit the WWII Memorial and bask in the glory that he and so many others deserved. But the Merchant Marines were not as featured as the Army, Navy, Coast Guard, Air Force and Marines. That is why I was so pleasantly surprised to see this section of the exhibit. To recognize the photo of exactly the type of Liberty Ship he served on. To learn he was one of 6,000 officers commissioned at the Merchant Marine Academy at Kings Point. To read about how crucial their role was.

Seeing it all so beautifully displayed and explained made me very happy and proud, and sad that he is not able to see it himself. That is why I will make sure my daughters see the exhibit, so the next generation can continue the personal history. And that is why I encourage others to visit the American History Museum. Even though it is a large Museum, it can be a very personal place. Who knows what treasure you will find?