This Sunday, June 14, the museum will host a naturalization ceremony in celebration of Flag Day. Twenty eight children will be sworn in as American citizens in the Flag Hall on the second floor of the museum. There is something exactly right about holding a citizenship ceremony in this building. History plays a big part in determining who we are as Americans, as members of our families, as employees in our jobs, the goals we set, and so on. I can’t imagine a more fitting place to become an American than in a museum that is chock full of our national history. 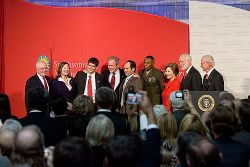 Five new citizens of the United States pose with President and Mrs. Bush and others after taking their oaths at the museum in November 2008.

I am working at the museum this summer on a project called American History for Citizenship. In order to become a United States citizen, an applicant must pass a test on American history and civics. There are organizations throughout the country that teach classes that help prospective citizens prepare for their tests. I am working to create an online database of educational resources—such as lesson plans and interactive activities—designed specifically for citizenship students. We will also host visits to the museum for citizenship classes in the D.C. area.

I have been spending a lot of time talking to citizenship class teachers throughout the country and sitting in on some classes here in D.C. so that I can figure out what sort of resources citizenship students need the most. During a class session at the Carlos Rosario International Charter School in Washington, D.C., I witnessed something that perfectly characterizes what I love about this project. A woman sitting in the front row of the class listened to the instructor’s lecture with particular interest. The teacher casually used the pronoun “we” as she discussed the wars of the 19th century. The woman in the front row turned her head to face the class and said, “It’s not them, it’s us. Now it’s us.” Her face was slightly flushed from the realization. She began to internalize American history and, as a result, she came one step closer to being an American citizen. That was the moment for her. It was an amazing thing to witness.

We expect the museum to inspire many moments like these as the American History for Citizenship project gets underway. It makes me very proud to know I will be able to help those that want to be naturalized citizens become Americans. I hope to see many of you at the naturalization ceremony this Sunday to welcome twenty eight new U.S. citizens!

Lauren Safranek is an intern in the Program in Latino History and Culture at the National Museum of American History.