A curator's favorite from the Scurlock Studio Collection

It’s been five years since I located this striking World War II era portrait of a young Washington, D.C., couple in the Scurlock Studio Collection housed in the museum’s Archives Center. It is my favorite among thousands of Scurlock photographs I’ve reviewed. I included it in my exhibition WWII Photographic Perspectives in 2004 and have kept a copy on my office wall since then. 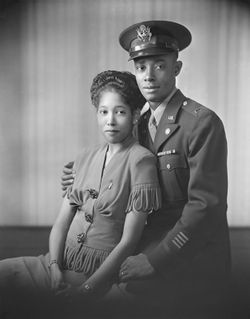 There’s something about the promise of this young couple, Mr. and Mrs. U.S. Ricks. I always wanted to know more about their story, their life. Did Mr. Ricks survive wartime? Did the couple enjoy a long marriage? Did they have children? Did they live their lives in Washington, D.C.? If yes, how did segregation affect their lives? And, what could they tell me about their visit to the Scurlock Studio? I didn’t uncover these answers until two weeks ago. Here’s the background story, a series of happy occurrences.

Working with my colleagues at the National Museum of African American History and Culture, I had the pleasure of co-curating a new Smithsonian exhibition The Scurlock Studio and Black Washington: Picturing the Promise, open until February 2010. In this exhibition, Mr. and Mrs. Ricks’ portrait is once again on view. The portrait attracts comments by many of the visitors I lead through the gallery and is also reproduced in the companion book.

A chance meeting at a local book-signing helped me locate Mr. and Mrs. Ricks. A woman named Alice Davis came to hear myself and the other editors of the book discuss the long history of the Scurlock Studio, owned and operated by the prominent local Washington, D.C., African American family. Ms. Davis purchased several books and stood in line to meet all of us, introducing herself as Mrs. Ricks’ sister. Gloria Ricks was still living here in D.C., and very proud of the portrait. Indeed one of the signed books was going to be a gift to her. Ms. Davis gave me Gloria’s phone number, and I followed up!

This handsome portrait of Ulysses and Gloria Ricks was taken by George Scurlock, just after Ulysses returned home from war in June 1944. Drafted into military service in 1941, he left his wife Gloria for the Pacific theater just two months after their marriage. The Ricks and Scurlock families knew each other well. Ulysses was a childhood friend of George Scurlock. Their family homes were both in the 1200 block of T Street, NW, Washington. Husband and wife both looked quite comfortable in front of the camera. They were expecting their first child later that year, and truly just starting their married life and professional careers.

Both Gloria and Ulysees were college educated. She attended Miner Teacher’s College, though not to become a teacher. Gloria worked at Chesapeake & Potomac Telephone Company, and was one of the first eight African Americans to integrate the company. Ulysses attended The Catholic University and later the Department of Agriculture Graduate School. Now retired, Ulysses was a trained librarian, and longtime employee of the Library of Congress. Today, after 67 years of marriage, Gloria still boasts of her beloved Ulysses, their son, and their travels around the world.

Sometimes you just know there’s a happy ending! I’ll keep the Ricks’ portrait up in my office long after the Scurlock exhibition closes. It serves as a reminder of my work collecting and exhibiting the Scurlock Studio Collection, and the importance of this archive to the local D.C. and national African American community. What a poignant and beautiful portrait it is, as so many are in the Scurlock Collection.

Michelle Delaney is Curator of Photography in the Division of Information Technology & Communications at the National Museum of American History.