Connecting past and present

Visitors to the museum last Wednesday were in for a treat. In addition to viewing the museum’s usual exhibitions, they were also given the unique opportunity to see 12 new exhibits and meet their creators. Nineteen finalists from the Kenneth E. Behring National History Day Contest displayed and discussed their projects with visitors. I was truly blown away by these middle and high school students. They spoke confidently and professionally about their research and exhibits. Their months of hard work and dedication showed in their projects. 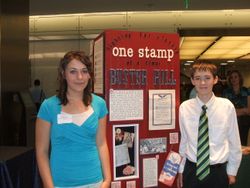 Marissa Lords and Tyler Stephens with their “Fighting For Victory One Stamp at a Time: Buster Hill” exhibit.

Students put a great deal of thought into the presentation of their research. An old-fashioned radio and fireplace created an atmosphere at the “FDR and the New Deal” exhibit. The students who created the “Alice Paul: ‘Jailed for Freedom’” exhibit made strategic choices about the tone of their project. “We wanted to show that Alice Paul was an ordinary woman and we kept it grayscale to convey what it was like in jail,” said Srishti Srivastava.

For many of the finalists, their research discoveries opened dialogue and created connections with people involved in their topic, propelling history out of the past and proving its relevance in the present. For her project "Justice Sandra Day O'Connor: Solidifying the Supreme Court," Jennifer Silver received a response from the Justice herself and a copy of the letter was included in the exhibit. Jacob Deitz, one of the creators of the “Abe Saperstein” exhibit said: “I never imagined that anything would happen because of National History Day, but the local newspaper wrote about us and the Harlem Globetrotters came to our school,” Jacob Deitz said.

Marissa Lords and Tyler Stephens, the creators of the “Fighting For Victory One Stamp at a Time: Buster Hill” exhibit, found the inspiration for their project in WWII memorabilia. “We found a pledge signed by Buster Hill, a young student, that said he would support the war effort in anyway he could,” said Marissa. They continued their research using a 1943 “School at War” scrapbook that described the war efforts of an elementary school class in Connecticut. “We published the names from the scrapbook and immediately we got a flurry of phone calls from people who had written in the scrapbook years ago,” said Marissa. “The stories of these children have taught me that everyone really does make a difference,” she said. “Even I have been able to make a difference by giving this history back to people who didn’t know what they were able to accomplish.”

Allison Scharfstein is an intern in the Office of Public Programs at the National Museum of American History.