Something in the news today caught me off guard. What I read was breaking news from the Associated Press (June 10, 2009): “Fiat Closes Deal to Take Chrysler’s Good Assets.” OK, once the Supreme Court removed the final obstacle to the takeover, this was expected. But what jarred me was this: “The Italian automaker won’t put any money into the deal but will give Chrysler sorely needed small-car and fuel-efficient engine technology.” I was surprised first of all that Fiat wasn’t contributing any money. But I was even more surprised that instead of money they were contributing innovative technology. Not that Fiat can’t invent, but what happened to the creative juices of U.S. manufacturers? 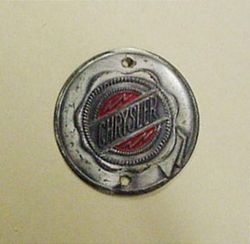 Chrysler radiator emblem, on display in America on the Move.

Having once owned a Vega, I know first-hand about Detroit’s problems with small-car technology. Maybe Fiat can help fix this, despite its own flirtation with bankruptcy only a few years ago. However, Detroit was once one of the most innovative places on earth, and U.S. auto manufacturing attracted some of the nation’s most inventive minds. True, in his address to Congress last February, President Obama had his history wrong when he credited America with inventing the car. But, he still had a point: Henry Ford’s introduction of the moving assembly line between 1910 and 1914 certainly reinvented the way cars are made. If you visit the Museum’s America on the Move exhibition and Web site, you can see how he revolutionized the auto industry. “Fordism” captivated not only America but the world.

A generation later, working in Japan during the Allied occupation after World War II, American statistician W. Edwards Deming instructed Japanese engineers and managers in the methods of statistical quality control, widely credited for the Japanese post-War economic miracle and the amazing resurgence of its auto industry. Ironically, facing formidable competition from Honda, Toyota, and other Japanese companies, the U.S. auto industry eventually came around when the ailing Ford company sought Deming’s help in the early 1980s. The result was the profitable Taurus-Sable line of cars. But that was more than two decades ago.

So, I’ll leave you with this 21st century puzzle: What happened to automotive innovation in the U.S. (and why does it need Fiat to show the way)? And, if one of our flagship industries can’t stand up to international competition, what does that say about America’s historic leadership in innovation?

Art Molella is Jerome and Dorothy Lemelson Director of the National Museum of American History’s Lemelson Center for the Study of Invention and Innovation.