Making connections to the past

On April 29th, my colleague, Michelle Delaney and I were pleased to open the exhibition, I Do Solemnly Swear: Photographs of the 2009 Presidential Inauguration. It was produced in tandem with the exceptional professionalism of our museum colleagues. We anticipated that it would be well-received, and one need only spend five minutes in the exhibition to see how engaged our visitors are. What actually pleases me most, though, is the way in which this exhibition relates to the rest of the museum. For me, it makes the point that history is relevant to our daily lives. 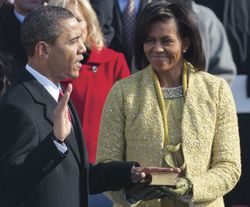 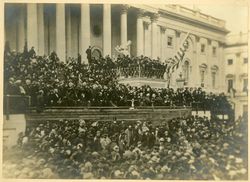 President Obama taking the Oath of Office, January 20, 2009 by Karen Ballard. Mrs. Obama is holding the Bible that Abraham Lincoln used in his first inauguration.

In I Do Solemnly Swear, two photographs include references to Abraham Lincoln, including the one seen here in which Obama is taking the Oath of Office using the Lincoln Bible. If visitors first go through Abraham Lincoln: An Extraordinary Life, up on the third floor, they might have a deeper understanding of why President Obama chose to draw links to the sixteenth president. If one visits the ”Abraham Lincoln” exhibition after seeing the photography show, then one has the opportunity to see a new relevance to Lincoln’s role in history.

At the opposite end of the second floor, on which the exhibition is located, is the Greensboro lunch counter. The Greensboro lunch counter is not just a static symbol representing the civil rights movement. Several times a day, a costumed historical interpreter leads some of our visitors in singing protest songs and teaches them non-violent protest techniques in preparation for enlisting four volunteers to experience the press of an angry crowd. It’s an intense experience. And yet it is only a small taste of what members of the civil rights movement truly experienced, ideas they embraced, and changes they influenced so that Barack Obama could become President.

I hope that those who visit our museum learn a little something in our exhibitions and find ways in which history is relevant to their lives. Perhaps, I Do Solemnly Swear, will help point that out.

Shannon Perich is an associate curator in the Photographic History Collection at the National Museum of American History. She co-curated “I Do Solemnly Swear: Photographs of the 2009 Presidential Inauguration” which is open though July 12, 2009.

EDITOR'S NOTE: Did you capture a moment during the 2009 presidential inauguration?  What did you use to take the picture? How did you share your pictures? On Facebook, Flickr, e-mail, online photo gallery, or simply hand someone a print?  You are invited to share your pictures and story with us for a digital archive created in conjunction with the I Do Solemnly Swear exhibition.