Knight at the museum

There are many heroes in the highly entertaining box-office hit, Night at the Museum: Battle of the Smithsonian. First we have Larry Daley, the former security guard now product development mogul, who accepts the challenge to rescue his friends—museum collections—from the ultimate embarrassment of being kept in storage at the Smithsonian Institution in Washington, D.C. Amelia Earhart, the spunky aviator who keeps Larry both distracted and focused on his mission, steals and literally shapes the movie’s final scenes. Former presidents Abraham Lincoln and Teddy Roosevelt dispense wit and wisdom and give support to Larry at critical moments. And we cannot ignore the pivotal role Albert Einstein plays by giving Larry the clue to decode a powerful and life-giving tablet. 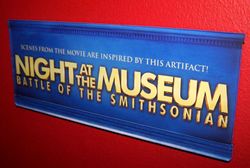 For me, however, I see real heroism in Dr. McPhee, the museum director. I know this may sound a little self-serving since I direct a museum. I also know that he appears briefly and seems completely baffled by the changes swirling about him. But, from my perspective, he makes two key decisions that drive the plot of this delightful movie. First, he decides to close the Museum of Natural History for renovations and introduce new technology to replace the old, tired dioramas and original artifacts. Second, he brings the old collections back but revives the galleries with lively, interactive programs in which history really does come alive.

It is true that Dr. McPhee makes these changes under considerable prodding and duress. His museum board pushed the idea of bringing virtual reality into the galleries in hope of attracting children and their parents. And he is able to restore the original artifacts and displays only because a gift from “an anonymous donor” required him to do so.

Whatever the reasons, Dr. McPhee is facing up to some of the major issues that occupy most of his real-life colleagues. As museum directors try to fulfill our missions to educate and inspire visitors, we are constantly aware of the tensions between tradition and modernity; between the authenticity of the collections and the excitement of new technology; and between the authority of the curator and the demands of the marketplace. In the current environment of dwindling endowments, decreased admission revenue, and shrinking philanthropic giving, museum directors are desperately searching for the code to unlock their own tablets of success.

At the top of the list of concerns for most museums is how to directly attract and involve visitors in the development of exhibitions and programs. A recent article in the publication ARTnews noted museum directors “are reconsidering how to install collections, curate exhibitions, design galleries, write labels, devise programming—and involve audiences, both current and potential, in the process.” To understand the changing nature and expectations of the audience, “some have begun reaching out to scientists, futurists, game designers, and other specialists outside the art world.” Some museums are inviting visitors to participate in ways that were unheard of in the past, even offering a chance to vote on the selection of art that would be included in an exhibition.

Even though admission to the Smithsonian is free and there is an annual appropriation from Congress, we are still buffeted by the same winds of change that are blowing through the corridors of America’s museums. When the National Museum of American History closed in 2006 for a two-year renovation, we had to address the aspirations, needs, and expectations of staff, board members, donors, and visitors. The transformation of the museum included opening up public areas, showcasing collections in new built-in display cases, and creating a “public square” at the heart of the museum for living history performances, naturalization ceremonies, and special events. Since the museum reopened last November, more than 2.5 million people have visited and we are constantly striving to make their experience inspiring and memorable. At the same time, we are dedicating scarce resources to preserving the collections that are of enduring value to the nation.

So, yes, I identify with the hapless yet heroic Dr. McPhee. He is on the cultural frontline fighting to preserve public memory. The real battle of the Smithsonian and of the entire museum community involves managing the complex and competing forces that confront museums today. We can only hope for a Hollywood ending.