The spirit of invention

I’m very excited about the publication of Julie Fenster’s intriguing new book, The Spirit of Invention: The Story of the Thinkers, Creators, and Dreamers Who Formed Our Nation, published in collaboration with the Lemelson Center. An award-winning author, Fenster focuses her attention not on well known inventors, but on the legions of obscure figures who collectively have transformed our world—the “little guys,” men and women alike, that Jerry Lemelson himself championed. 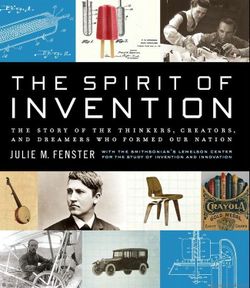 Pick up Fenster’s book and find out, for example, about the improbable and little known career of Robert Switzer, a Berkeley student who made a hobby of magic tricks. In 1932, an accident put him into a coma, from which he slowly recovered in an unlit room. To amuse himself in this darkened convalescence, he played with the spectacular rainbow emissions from fluorescent rocks. Turning on another light in his mind, this led to his invention of glow-in-the-dark paints that he and his brother marketed at first to magicians. Soon after, dropping out of college, the Switzers discovered a way to use ordinary sunlight to bring out fluorescent colors—Day-Glo, patented in 1947.

In contrast, Howard Head started on a more conventional path as a project engineer at the Glenn L. Martin aircraft company during World War II. Thereafter, however, things took a different turn—as in ski turns. An intense desire to excel in sports coupled with a sad lack of athletic ability motivated Head to seek technological advantage in sports equipment. He applied his knowledge of aircraft construction to the invention of futuristic skis, much lighter and holding sharper edges than the conventional wooden variety, which ended up revolutionizing the sport for amateurs and professionals alike. He later did the same thing for the game of tennis, introducing the oversized racket that has since become the standard. (You can see Head’s ski and tennis racket prototypes in the Lemelson Center’s Sporting Invention exhibit on the first floor west of the museum.)

So I invite you to dip into Fenster’s book and find compelling stories about common people driven by an uncommon inventive spirit who have changed our world.