This real photo postcard shows three young men enjoying the holiday weekend. The young man on the left has taken the photograph using a string attachment so he too can be in the photograph. The names of the young men seem to be on the actual tent, rather than added to the photo later. Their bed rolls can be seen inside the tent and fishing poles just outside. 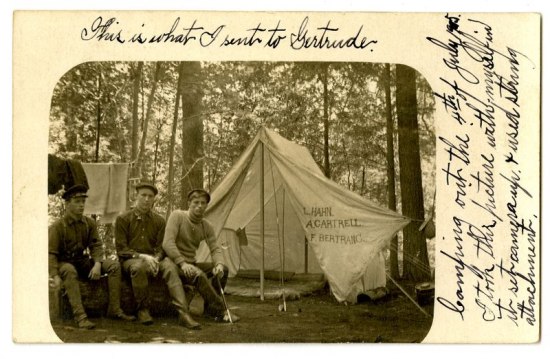 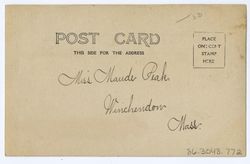 Real photo postcards were incredibly popular from about 1900 to WWI. They were made on thick photo paper with the postcard info pre-printed the back. On this postcard, you can see the author has written his message on the front instead of the back. In 1907, postal regulations were changed to create the divided back postcard allowing senders to put messages and addresses on the back, keeping the front image unmarred.

The museum’s Photographic History Collection (PHC) has some 3,000 postcards exploring a range of topics made by amateur and professional photographers. Real photo postcards can still be found in antique stores, flea markets, and the like. In private collections, they are found among loose snapshots, albums, and framed images, sometimes surprising owners with a wealth of hidden information on the back.

The postmarks can help date the photo and begin tracking a chain of communication. In our example here, we have two friends communicating who live in different locations—the text references a third friend, Gertrude—and then there are the two young men in the photo. One can begin to see a social network building. (Note to teachers: Real photo postcards are great resources for creative writing projects.) You’ll notice, too, that the address looks different than the way we write them today. For instance there is no zip code. The zip code system wasn’t put into place until July 1, 1963.

One set of real photo postcards in the PHC reveals that mail in the Bedford, Massachusetts, area in the early 1900s was delivered several times a day. One young woman would invite friends for tea, or let them know she was leaving class early to catch a train to visit, and receive responses from them on the same day.

I like these real photo cards because they are often snapshots—casual events and milestones in life that were intentionally shared across time and space. They offer historians and researchers views into what some people thought was interesting enough and important enough to share with others—sort of like today’s Facebook, Shutterfly, Flickr, and other such image sharing sites—though perhaps with reduced numbers! If you are in the museum over the July 4th weekend, be sure to share your photos and memories of your visit with others by joining our group on the Flickr.