From Kiyosato to Kiyo Sato

Kiyosato. At first, that name meant to me the Kiyosato Museum of Photographic Arts in Japan. Its director is Eikoh Hosoe, a renowned photographer whose controversial exhibition, “Man and Woman,” I curated for the National Museum of American History many years ago. These art photographs of nudes were displayed in a museum which then, paradoxically, emphasized the history of technology. Five photographs from my exhibition remain in the museum’s photographic history collections.

But Kiyo Sato is the name of a woman. This delightful Japanese American came to the museum’s Archives Center in early 2009 with her daughter, Cia, and friends, to view a letter she had written to her teacher, Mary Aline Cox, during World War II. Kiyo and her family, like thousands of other Japanese Americans, had been removed from her home and placed in an internment camp. Kiyo and other former students at the Edward Kelly School in Sacramento wrote from internment camps and schools to Miss Cox, a kind, beloved figure who had tried to protect her Japanese American students during the evacuations mandated by Executive Order 9066. Internees were permitted to leave the camps if they had jobs, attended a college, or agreed to join the U.S. military, and passed investigations which certified their loyalty to the United States. E. Gerald Lamboley, a U.S. military intelligence officer, was tasked with investigating these young evacuees. One source of information was Miss Cox, who gave him letters from her former Japanese American students. He kept some letters, which over the years dwindled to only six, including one from Kiyo Sato, dated December 26, 1942. In 1992 Mr. Lamboley donated these letters to the Archives Center, where they were archived and catalogued.

In January 2009 Colleen Zoller wrote to us after seeing the description of the Lamboley Collection of Japanese-American Letters in the SIRIS (Smithsonian Institution Research Information System) online database. She provided Miss Cox’s full name, obituary, and other information, and identified Kiyo Sato as the author of the letter signed “Kiyo.” She mentioned Ms. Sato’s memoir, which centers on the internment experience and its aftermath. The memoir has been republished as Kiyo’s Story: A Japanese Family’s Quest for the American Dream. Since she was scheduled to speak at a Smithsonian program, with the help of Noriko Sanefuji in the museum’s Division of Home and Community Life, I invited her to visit the Archives Center during her Washington visit. 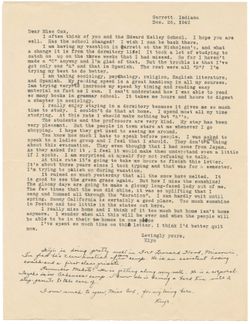 Ms. Sato was the first woman to be released from her desert internment camp to attend college. Her letter was written from Garrett, Indiana, where she spent Christmas vacation with the Nicholson family. She described her academic struggles, but said she was happy with college life; she said other students and professors were kind, but townspeople stared at her when she went shopping. She said she had been asked to speak to a women’s group about her internment experiences and had surprised herself by accepting, despite her discomfort with public speaking. She hoped her talk might promote understanding.

John Fleckner, founding director of the Archives Center, jokes that archivists basically “read dead people’s mail.” Miss Cox is gone but Kiyo Sato is very much alive. She was astounded that these letters had survived and were available to Archives Center researchers. At her request, I wrote to Mr. Lamboley, who is still living in Washington, and asked permission to give her his address and phone number. I was uncertain how he would react, since the letters had once served as evidence in a loyalty investigation; the need to prove their patriotism and loyalty was a sensitive subject for Japanese Americans who had suffered the internment nightmare. Mr. Lamboley quickly wrote that he would be delighted to speak to Ms. Sato about their shared history. I can imagine her questions! Archivists and curators often consider their collections as resources for dispassionate scholarly research, but also are keenly aware of the real-life, emotionally charged human experiences which they embody. I was deeply moved to see Ms. Sato,her daughter, and friends eagerly poring over these war letters and to sense the traumatic stories behind them.

I saw Eikoh Hosoe last November. I’ve meant to write to him about photography and museums. I may also ask about the war, when he was a teenager, and its impact on his photography. I’m eager to tell him about meeting Kiyo and how “Kiyosato” has taken on a dual meaning for me.