The oral history program with renowned author and global environmentalist Lester Brown last month was an eloquent reminder that the stories and people behind our collections are as interesting as the objects themselves. Brown—who founded the Worldwatch Institute in 1974, the Earth Policy Institute in 2001, and has authored or coauthored 50 books—was interviewed on stage by noted historian Marc Pachter, formerly director of the National Portrait Gallery and acting director of the National Museum of American History. Pachter developed the notion of “Living Self Portraits” to encourage prominent people to describe important influences on their lives. For this program Pachter only interviews people in their 70s and older, and only if they are still mid-career in the sense that they continue to be actively productive and creative. The program was presented by the museum’s Lemelson Center for the Study of Invention and Innovation as part of its “Portraits of Invention” series. At 75, and with his latest book, Plan B 4.0: Mobilizing to Save Civilization on its way to the printer, Brown epitomizes both the creativity and productivity Pachter studies and the innovative approaches documented by the Lemelson Center. 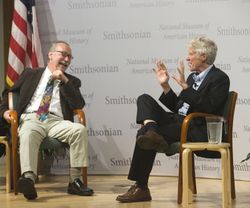 Despite his prodigious writings and numerous speaking engagements, Lester Brown rarely speaks publicly about himself, so the program ploughed a lot of new ground—even for people like me who have known Brown for many years. Pachter was able to move beyond the standard biographical details: son of a tomato farmer and successful tomato farmer in his own right; seminal trip to India in an agricultural exchange program; productive and meteoric if irreverent stint at the U.S. Department of Agriculture; fortunate funding to start the Worldwatch Institute. We learned about Brown’s motivations, hopes and dreams, and left understanding more about how the son of a sharecropper became the type of person who meets with heads of state when he travels overseas. The considerable number of young people in the audience gained tremendous insight into how Brown got where he is today and were treated to a vivid demonstration of how a 75 year old can be phenomenally smart, energetic, and productive.

Pachter ended the program on an important point by calling Brown a humanist. He noted that, while many environmentalists rally to save the planet, Brown’s latest book is subtitled “Mobilizing to Save Civilization.” In fact, one of the hallmarks of Brown’s work from the start of his career has been to factor people into his environmental reasoning.

Likewise, our museum’s collections of oral histories focus on the humanity behind our objects. —including intriguing artifacts like a dictaphone recorder (from a man who never learned to type), index cards printed with Brown’s daily schedule that were kept hidden in his shirt pocket, and handwritten notes used throughout his career to prepare for talks. If you want to understand the man behind these artifacts, you can turn to this interview.

Who else would you like to see interviewed? You can let us know through your comments.

Judy Gradwohl is Associate Director for Public Programs. Before joining the National Museum of American History, she founded the Smithsonian’s Environmental Awareness Program.