Winner in a star-spangled dress

In honor of Independence Day, we asked our readers to vote on who was best dressed in red, white, and blue. The contestants were drawn from entries we received as part of our Star-Spangled Banner singing contest on YouTube (which concluded in May). 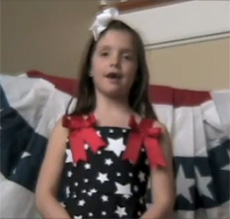 After a week of voting, I’m pleased to announce the winner of this mini-contest: it’s seven year old Ellie! In her video, Ellie—outfitted in a blue dress covered in white stars and decorated with red bows—performs a charming rendition of the national anthem. Standing in front of a stars and stripes bunting, Ellie’s face beams with pride and enthusiasm for the Star-Spangled Banner.

Thanks, Ellie, for sharing your song with us and for showing us how to dress up with patriotic flair!