“Above all, have a good time”

To celebrate Julia Child’s wall of copper pots joining the museum’s collections, we’re taking Julia’s philosophy to heart. Inspired by her admonitions to take to our kitchens, to muster the courage to try cooking something new, and to discover the pleasures of the table, we are preparing to cook some of her key recipes ourselves. Over the next few months we’ll be following Julia’s detailed instructions and reminding ourselves of her masterful teaching style and her enthusiasm for the tools and techniques of cooking. Along the way we will feature specific tools and gadgets in Julia’s home kitchen, which has been on view at the museum since 2002, and, true to her philosophy, we’ll share our experiences in this space. Finally, we invite you to join with us in this celebration of Julia Child’s life, work, and contributions to American culinary history.

About this Dish: Reine de Saba 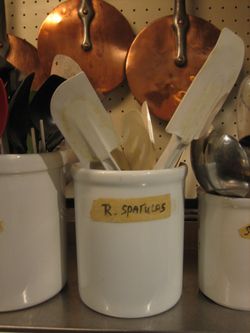 In the hundredth episode of the television series, The French Chef, Julia made the Reine de Saba, or Queen of Sheba cake. One of the tools she used for making this special cake with the grand name was an ordinary rubber spatula. Essential for folding the smooth and shiny beaten egg whites into the batter, Julia also noted that the rubber spatula was one of America’s great culinary contributions. She kept her spatulas in a ceramic crock on a shelf above her stove.

This week, curator Paula Johnson shares her experience of baking the cake in an authentically Julia way:

On a hot summer night in 2002, I lost my mind and thought I could make a cake. Not just any cake, but a Reine de Saba, Julia Child’s recipe for an “extremely good chocolate cake” also called the “Queen of Sheba.” I had made the cake many times before and had always enjoyed the process of transforming lots of butter, sugar, eggs, chocolate, and just a little flour into a beautiful cake with a creamy center. I always relished reaching the decision point—shall I melt the chocolate in rum or coffee?—and then sipping an unholy combination of the two as the cake baked.

I had no reason to believe I couldn’t do it again, but July 2002 was no ordinary time. It was exhibition installation time, that heady, exhausting phase experienced by museum staff, when the usual notions of time and space become scrambled. The Julia Child exhibition team, of which I was a member, was installing Julia’s kitchen in the museum gallery, galloping toward the goal of opening the exhibition in time for Julia’s 90th birthday in August. By mid-July we felt certain we would make that deadline, as long as the usual notions of time and space did not apply. Long hours spent standing, reaching, carrying, polishing, lifting, and fixing had become the norm.

With a shock, my colleague Nanci Edwards and I realized one of our team members, Rayna Green, was having a milestone birthday the following day. Ignoring the fact that it was already evening, I decided to go home and make a Reine de Saba to mark the occasion. “A Reine for Rayna!” I remember thinking. As I cleared space and lined up the ingredients, I looked at the clock. Hmmm. Ten p.m., shouldn’t be a problem. This is the deluded mind of someone in exhibition installation mode. 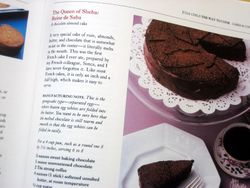 But I started in and chose coffee as the chocolate-melting medium on the theory that I could drink the rest of it (without rum) and stay wide awake. I creamed the butter and sugar together. Pale and fluffy, just like Julia says it should be. Blending the egg yolks—beautiful! As I prepared to beat the egg whites into soft peaks I had a moment of insanity: instead of using an electric mixer, why not do it the old-fashioned way, as Julia suggests by directing her students to page 159 of Mastering the Art of French Cooking, Vol. I, “How to beat egg whites by hand.” We had been living amongst Julia’s kitchen equipment and work space, and I could hear her rallying cry to “just try!” I scanned her instructions: “Start beating at a speed of 2 strokes per second with a vertical, circular motion for 20 to 30 seconds . . . Using your lower-arm and wrist muscles for beating—shoulder muscles tire quickly—gradually increase the beating speed to 4 strokes per second …”

Thus began my descent. Did I say it was July (in D.C.!)? That it was HOT? That by now it was 11 p.m.? Try as I might, I couldn’t get the peaks to form. My lower-arm and wrist muscles gave out so I tried putting what my dad used to call “elbow grease” behind the motion, with no improvement. The cacophony in the kitchen woke up the household and I soon had two cats rubbing against my ankles, creating even more heat. The preheated oven taunted me to get the job done, already. Channeling Julia again I kept at it and, finally, all at once it seemed, I had achieved “stiffly beaten egg whites.”

I stumbled through the rest of the recipe and stayed awake while the cake baked by giving myself another task: I melted more chocolate to chill for use in decorating the top of the cake. Insane.

The following day, in quiet comfort after another long day of installation, we toasted Rayna and shared the cake, which had illegible chocolate decorations on the top and a middle that wasn’t as creamy as it should have been (too much elbow grease, I think). But we followed Julia’s advice and, above all, we had a good time.

We invite you to join with us in this celebration of Julia Child’s life, work, and contributions to American culinary history. Please share your experiences making Julia Child’s Reine de Saba cake by posting your story, photos, or video on our Tumblr page for this recipe series. Don’t forget to check back next week for mashed potatoes.

Paula Johnson is a curator in the Division of Work and Industry at the National Museum of American History.