Today’s post is the second in a series of weekly Julia Child recipes. This week, project manager Nanci Edwards shares her experience of mashing potatoes—and discovering a bonus dish to make with the leftovers.

“Now this is a great German potato ricer . . . it really does the job” 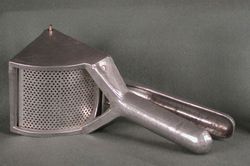 Julia’s kitchen contains an intriguing mix of old and new tools spanning well over half a century. If a tool worked, she used it. If it didn’t, she got rid of it. And if a new tool for doing something in the kitchen came along, she was the first to try it. Yet Julia was loyal to those tools that had worked for her and didn’t discard her trusty old implements just because new technology came on the scene. This is why a large potato ricer, bought in Germany in the mid-1950s, still hangs on her pegboard just a few feet away from the shiny blue “K-5A,” her Kitchen Aid stand mixer. She used both for making this week’s recipe—mashed potatoes. While the ricer was perfect for making small batches of mashed potatoes or other pureed vegetables, the electric mixer was the answer to mashing potatoes for a hungry Thanksgiving crowd.

Nanci’s Story: A Meal Is Not Complete Without a Potato

In our house, there would be a potato at every meal! So when it came time to pick a recipe to cook for this weekly series, it was a no-brainer to pick mashed potatoes. My husband, Bryan, thought we should up the ante (and our experience) by choosing to do Julia’s recipe for garlic mashed potatoes.

We used the recipe in The Way To Cook, with the optional directions for garlic mashed potatoes. After reading the recipe we did have to make a substitution. One of us is lactose intolerant and therefore we substituted whole lactose-free milk for the cream or milk listed in both recipes.

We both agreed that a thorough read-through of both recipes (mashed potatoes and garlic mashed potatoes) was necessary to understand what we were supposed to do. There were two boxes of information to the right of the recipe, one for Braised Garlic Cloves, and one for braised Garlic Cloves in Cream. It took a couple of read-throughs to realize that we wanted to do both steps! The result was delicious, and yielded potatoes that tasted almost sweet thanks to the braised garlic.

Here are the images we took of the process. Please be sure to check below for the “bonus” recipe that resulted from leftover mashed potatoes!

As Bryan boiled the potatoes, I began braising the garlic until slightly golden, which takes some monitoring so it does not brown. 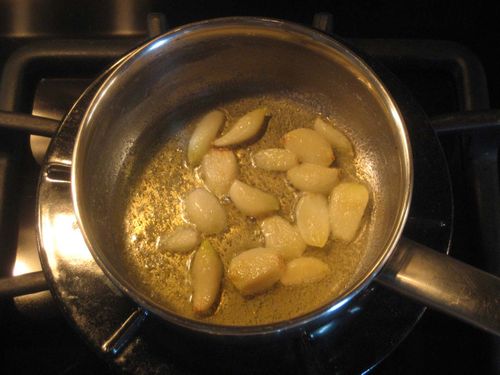 I added the milk and cooked until it was “meltingly” soft. 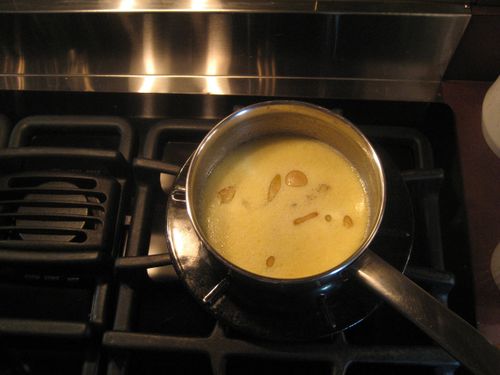 The potatoes cooked in about the time noted in the recipe (10–15 minutes). After draining the potatoes, Bryan put them back into the pot to dry them out and get rid of as much moisture as possible (excess water and spuds do not make good mashed potatoes). 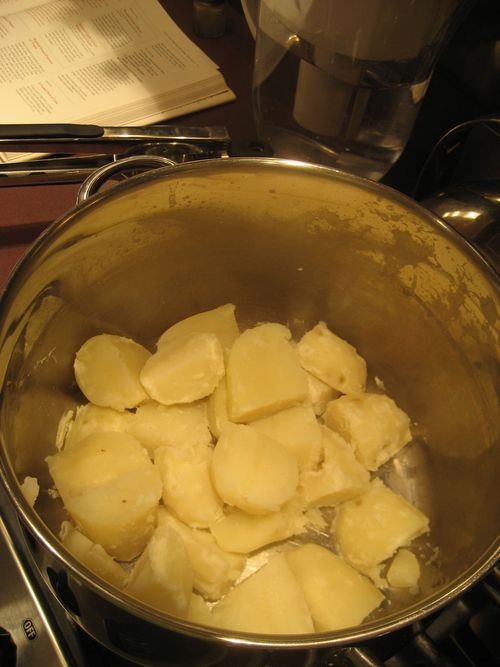 Bryan put the potatoes in the ricer and “whoosh”—riced potates fell into the pot. While not an industrial-sized ricer like Julia’s, this sleek number did the job! 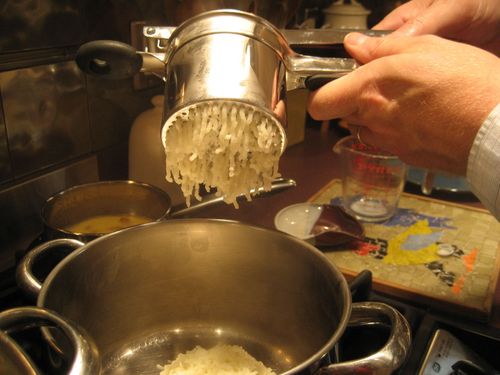 We pureed the garlic and milk, then poured it into the riced potatoes. This was tricky only in the sense that we weren’t sure what tool to use to puree. I finally opted for a “stick” blender AFTER pouring the mixture into a deep measuring cup. My first attempt in the pan yielded a pinwheel of garlic milk all over the stove and adjacent walls! 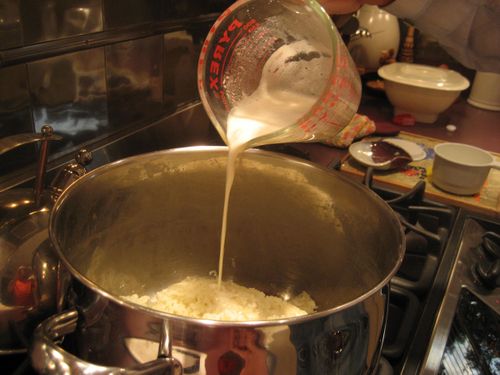 The result? Perfection in a bowl. Bryan and I were joined by our friends, Patrick and Tim, for a delicious dinner of garlic mashed potatoes, grilled flank steak, a garden fresh salad, and a lovely Cote du Rhone! 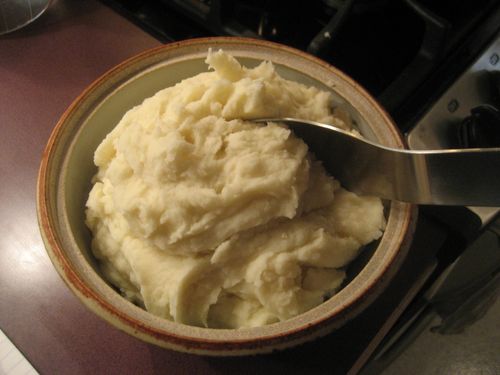 No one thought there would be leftovers, but thank goodness there were, because we never would have delved in Mastering the Art of French Cooking, Volume Two (page 402) to find the recipe for leftover mashed potatoes. Honestly, I think they were better than the original!

Also known as potato pancakes, Julia refers to them as "Gallettes de Pommes Duchesse." We just call them amazing! The directions for making potato pancakes were terrific, straight-forward, nothing that prompted any head scratching.

Julia called for a not-too-fine breading. We used Panko (Japanese breadcrumbs). The other substitution was to not use the 5-6 Tbl. of clarified butter. Instead we substituted 1 Tbl. butter and 1 Tbl. olive oil, which seemed to work out fine.

As you can see they are crispy and brown, and they tasted like a million bucks. This recipe is a keeper! In our humble opinion, you should make extra mashed potatoes so you have the left-overs to make these most delicious potato pancakes. 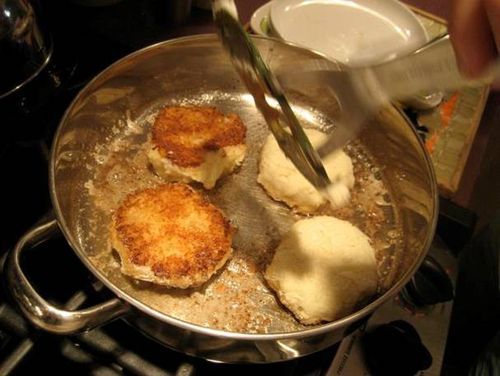 We invite you to join with us in this celebration of Julia Child’s life, work, and contributions to American culinary history. Please share your experiences making Julia Child’s mashed potatoes by posting your story, photos, or video on our Tumblr page for this recipe series. Don’t forget to check back next week for Coq au Vin.

Nanci Edwards is a project manager at the National Museum of American History.