One of the joys of a curator’s job is finding things and telling their stories. We recently found two partial sets of Dutch Sugar Color Standards in the Physical Sciences Collection. “Found” is perhaps not the operative word as these jars were never lost. But we had not appreciated their rarity or historical significance. 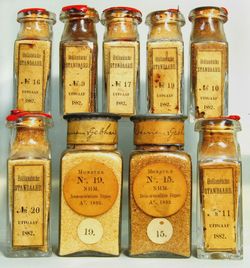 The Dutch Standard was designed to determine where a sugar sample stood on the continuum from raw to refined. It consisted of a set of glass jars filled with different sugars. Each jar was numbered, and the lower the number, the rawer the sugar. Because the color of the sugars tended to fade when exposed to light, a new set was released every two years.

To raise revenue and protect domestic refiners, the United States taxed imported sugar on the basis of quality. The first tariff, enacted on July 4, 1789, levied a tax of 1¢ a pound on brown sugar, 3¢ a pound on refined white sugar, and 1.5¢ a pound for sugars in between. Subsequent tariffs would change the rates but maintain the principle. The Dutch Standard was written into law in 1861 when Congress passed An Act to Increase the Duties on Tea, Coffee, and Sugar. This said, in part, that “On raw sugar, commonly called Muscovado or brown sugar, and on all sugars not advanced above number twelve Dutch Standard, by claying, boiling” the tariff would be 2.5¢ a pound; on those of twelve and above it would be 3¢ a pound; and on highly refined sugars it would be 5¢ a pound.

Even as the Dutch Standard was coming into use, sugar makers in the Tropics were adopting techniques that enabled them to produce cane sugar that was increasingly pure, and sugar makers in Europe were learning how to produce a high quality beet sugar—and both groups were darkening sugars bound for the United States in order to lessen their tariff burden. That is, the makers would darken their sugar with some stuff that could easily be washed away once the product had been brought into the United States.

Meanwhile, scientists and instrument makers were developing a polariscopic method for measuring the purity of sugar samples. Congress wrote the new instrument into law in 1882. Henceforth, it said, sugars would be divided into two groups: those below (or darker than) No. 13 Dutch Standard, and those of No. 13 Dutch Standard and above. For the former group, polarimeters would be used to ferret out cheats. For the latter group, the Dutch Standard would continue to be used. The American tariff enacted in 1894 kept the principle, but raised the arbitrary dividing line between raw sugar and refined from No. 13 to No. 16 Dutch Standard. The tariff revision of 1913 dropped the Dutch Standard altogether, largely for political rather than technical reasons. Henceforth customs agents would rely solely on polarimeters for sugar analysis.

The National Museum of American History (originally the Museum of History and Technology) has long had a substantial interest in and commitment to the history of science and technology, and curators have been encouraged to develop collections in these areas. Some of this collecting was done in industry, some in academia, and some in government. The jars at hand, along with several polarimeters, came to the museum in 1960 as a transfer from the National Bureau of Standards, an organization that, since its establishment in 1901, has tested and developed sugar-analysis apparatus for federal and state agencies and the public at large.

The other two jars come from the “edition” of 1892. Each measures 4.5 cm. square and 10 cm. high. Each has a paper label that reads “MONSTER NHM. Zeven-en-twintigste Uitgave. Ao. 1892.” along with the appropriate number: No. 15 or No. 19. Each has a grayish metal lid marked with the names of important sugar traders: “BLOEMEN & GEBHARD & CO. ROTTERDAM AMSTERDAM.” “Monster” is a Dutch word for sample. “NHM” stands for the Dutch duty mark. And since this is the twenty-seventh edition and new editions were made every two years, this series probably began in 1840.

Deborah Warner, Ann Seeger, and Roger Sherman are curators in the Division of Medicine and Science at the National Museum of American History.