I have always liked jigsaw puzzles. When I was five, I spent one weekend putting together every puzzle in my house and then proceeded to construct a pathway of puzzles around my room. I was reminded of this the other day, when I found myself onboard the gunboat Philadelphia. Sunk by the British at the Battle of Valcour Island in 1776, the Philadelphia is part of an important episode in the American Revolution and is currently on display at the museum.

I had a pile of original bricks in front of me–some whole, some just fragments–and two old photographs that showed how the gunboat’s hearth, which was used primarily for cooking, should look. My instructions were simple: take the bricks and build a structure that closely resembled the one in the image. As I sat there putting together this 233-year-old puzzle, I came to realize how much of my summer internship could be classified as a series of exercises in puzzle building. Indeed, the work of an historian is often just so; we are tasked with taking clues from artifacts, photographs, and documents in an attempt to piece together a broader picture of past events. 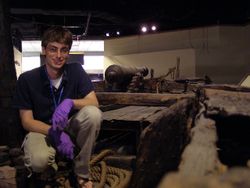 Take, for example, the pewter spoons that were found onboard the Philadelphia when it was salvaged in 1935. With just a passing glance, one might only see an assortment of tarnished old spoons which date back to the Revolutionary War. An interesting fact, in and of itself, but what if these seemingly mundane artifacts could tell us more about the Philadelphia and its crew? Upon closer examination, the exhibit team discovered roughly inscribed letters on the handles of two spoons in our collection. Etched with a knife or a nail, does the irregular script indicate that these were part of the personal effects of individual crewmen? As American independence was not yet a year old and the army was only meagerly supplied, it is likely that these spoons were brought from home and marked so that they would not be stolen or lost. What a potentially fascinating insight into the cobbled-together nature of the early American military!

But the puzzle doesn’t end there. When compared to the crew’s payroll, combining the information found in both the artifacts and an historic document, we came to an interesting realization. At least one of the spoons, monogrammed with the letters “SHI,” belonged to either Marrean Samuel Harris or Samuel Heath, both New Hampshire militiamen who served onboard the Philadelphia at the Battle of Valcour Island. Further research revealed that Marrean Heath went missing in action on the day of the battle and was never paroled from military service. Could it be that this simple spoon belonged to one of America’s earliest Revolutionary War casualties?

It is often said that historians must think like detectives, comparing evidence from a variety of sources and examining all plausible conclusions. After ten weeks of puzzling out the history of the gunboat Philadelphia, this notion has been burned into my mind as one of the truths of my chosen career. It is also something that, when explored in depth, can make history fun for young and old.

William Stoutamire is an intern in the Division of Military History and Diplomacy at the National Museum of American History.