Inventions of the rich and famous

August was National Inventors’ Month and the Lemelson Center celebrated with a number of high-profile events to highlight that ordinary people, regardless of circumstances, can be inventors, or at least take part in the invention process. 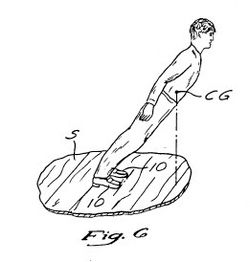 Often overlooked, however, are the little-known contributions of the rich and famous. Take the case of musicians and movie stars, for example. Even though they are creative in their own fields, it never occurs to us that they could also be inventors. We were all shocked to learn of Michael Jackson’s sudden death. But, as we said our farewells to this amazing performer, we were in for another surprise: he had a patent. Awarded jointly to him and to two of his costume-men in 1993, the patent described specially designed shoes that gave the illusion of his leaning beyond his center of gravity. The move and the associated gadget were created for his 1988 music video, Smooth Criminal, something to upstage his unique (I can’t say patented) “moonwalk,” perhaps.

Jackson was far from the only “patented” celebrity performer. For instance, his friend Marlon Brando also dabbled in invention, at least toward the end of his life when he earned several patents related to a device for tuning drumheads. One can envision him on some beach in Tahiti, turning out invention ideas to the beat of bongos. The ranks of improbable inventors also include two of the Marx brothers—Zeppo (Herbert) and Gummo (Milton)—who showed that even comic geniuses could take to the serious task of invention.

Patriotism motivated other performers. During World War II, the stunning Austrian-born movie star Hedy Lamarr approached her Hollywood neighbor, the avant-garde composer George Antheil, about contributing ideas to the National Inventors Council, established under the National Bureau of Standards to solicit inventions from U.S. citizens for the war effort. She even thought of cashing in her acting career to become an inventor. Their 1941 patent for “frequency hopping” was applied to secret communications and to radio-guided torpedoes, among other weapons. Eventually, some of this technology found its way into Wi-Fi networking and wireless telephony.

I could go on and on. These are just a few examples from a long list of known celebrity inventors. So as we continue to honor the anonymous and ordinary inventor, let us not forget the unheralded role of others. Michael Jackson serves to remind us that anybody—even the very rich and the very famous—can invent.

Arthur Molella is Jerome and Dorothy Lemelson Director of the Lemelson Center for the Study of Invention and Innovation at the National Museum of American History.