I grew up in Colorado. Just about every time I mention that fact to someone, I get asked, “Do you ski?” And for years I would launch into my explanation for why I didn’t ski: its expensive, my parents were not athletic, and there wasn’t anyone around who could drive me up to the ski resorts. Boring! So finally, after moving to the east coast—where there isn’t any real snow—I decided to try snowboarding. It looked like fun and I liked the gear. And besides, I had heard that even though the initial learning curve was steeper compared to skiing, once I got the hang of snowboarding I would have a lot more fun. 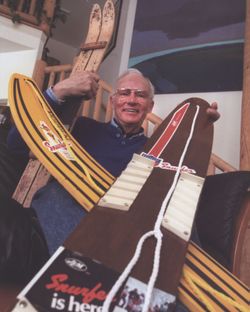 Well, I have since tried skiing too, and I can’t say that I’ve gotten the hang of either sport. But I have wondered why snowboarding is such a recent development compared to skiing, which has been around for hundreds (maybe even thousands) of years. Why didn’t anyone think of this sooner? While we will probably never know the answer to that question, I did recently meet Sherman Poppen, the “grandfather of snowboarding.”

To be more precise, Poppen is the inventor of the Snurfer. On Christmas Day in 1965, he began tinkering in his garage in Muskegon, Michigan, and in the process invented an entirely new winter sport. To entertain his young daughters, he took a pair of children’s snow skis and bound them together to make a single, wide board. He was thinking, as he explained later in his patent application, of a “new snow sport which incorporates features of certain summer pastimes, namely surfboarding, skate boarding, and slalom water skiing.” Delighted with her husband’s invention, Nancy Poppen called the new toy “Snurfer,” a contraction of “snow surfer.” Sherm, as he liked to be called, went on to patent his invention (#3,378,274), and he licensed his creation to Brunswick Corporation of Lake Forest, Illinois. Within a year, Snurfers were flying off store shelves, just in time for Christmas. 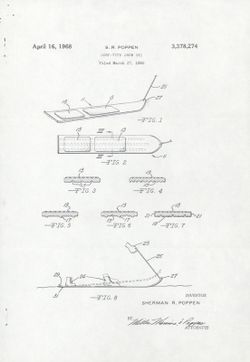 To ride the Snurfer, one simply stood on the board and held on to a lanyard attached to the front end. Since Snurfers didn’t have bindings, they couldn’t be taken on chair lifts at ski resorts. The credit for the invention of the modern snowboard is controversial, but it is clear that a number of innovators began experimenting with bindings in the 1970s. Most enthusiasts seem to agree that the first competitive snowboard competition was held in 1979 at the World Snurfing Championship in Grand Rapids, Michigan. Jake Burton, who rode a board with bindings of his own design, was the winner—and the sole competitor. Burton went on to lobby ski resorts to open their lifts to snowboarders, and when they finally began to do so in the early 1980s, Burton was ready with boards to sell.

Luckily for the Lemelson Center, where we study American inventors, Poppen saved his records and recently contacted the Smithsonian to inquire about donating them. We met with Sherm and his second wife Louise when they brought some items from his collection, including a prototype and two commercial boards, to the National Museum of American History in April. Eager to document his work as an inventor more completely, I visited the Poppens at their home in Denver, Colorado in June. There I found more prototypes and additional papers related to patenting, manufacturing, and marketing the Snurfer. The prototypes and boards have now joined the museum’s sports history collections, and the papers will be processed and made available in the Archives Center. While we don’t have any immediate plans to put the Snurfer on exhibit, I will be sharing Sherm’s story and showing a few of the items he donated during my Meet Our Museum talk on September 24th.

I’m a little disappointed that learning how to snowboard hasn’t been as easy for me as I had hoped. But meeting Sherm Poppen has inspired me to get out there and try again.

Maggie Dennis is the Historian and Fellowship Coordinator for the Jerome and Dorothy Lemelson Center for the Study of Invention and Innovation.