Today’s post is the seventh in a series of weekly Julia Child recipes. This week, new media project manager Dana Allen-Greil shares what she learned about clarified butter and adding lemon juice to a hot pan while making Julia’s sole meuniére.

“That oval is a wonderful pan!”

Julia identified and demonstrated many of her kitchen tools during an interview with the Smithsonian team in 2001. She spoke glowingly of this large, oval, black steel sauté pan, declaring it the perfect pan for one of her favorite dishes, sole meuniére, “where you sauté the whole sole in butter. It’s lovely! You want a pan that the whole thing can fit in, so that oval is a wonderful pan.” This pan was among those donated to the Smithsonian in 2009.

Where to find the master recipe for Sole Meuniére:

I remember holding that gun in my hand like it was yesterday. I was standing in the middle of the store with my fiance, poised to shoot. “Wait!,” he cried out, reaching to point the gun away from my target. “I really don’t think we need fine china,” he continued. He held up a blood red salad bowl—its irregular and slightly rough edges mirroring my own ragged nerves about completing a wedding registry that the two of us actually agreed on. Luckily, selecting our dinnerware turned out to be one of the tougher negotiations—the rest was much smoother sailing. Using the wireless laser gun to select the kitchenware of our dreams, we traversed the store together, shooting at everything from cutting boards to rice cookers. While we didn’t happen upon an oval-shaped black steel sauté pan like Julia’s, we did quickly agree on a set of hard-anodized non-stick cookware. It was a 10” fry pan from that set that we used, after five years of marriage, to make Julia’s sole meuniére recipe together.

In her memoir, My Life in France, Julia describes her first meal in France (November, 1948): the sole meuniére was “perfectly browned in a sputtering butter sauce,” a key player in what she called “the most exciting meal of my life.” It seemed fitting to make this life-altering dish with the man who introduced me to the pleasures of seafood. (And by “introduced,” I mean a calculated series of events designed to condition me to the fruits of the sea, starting with a birthday dinner featuring not one, but three, Maryland crab dishes—all of which I refused to eat.) Strangely enough, the recipe for this entrée into Julia’s culinary life (pun intended) doesn’t appear in her tour de force cookbook, Mastering the Art of French Cooking. Instead, we studied the recipes found in Julia and Jacques Cooking at Home, The Way to Cook, and Julia’s Kitchen Wisdom, synthesizing them into one actionable plan. Spending time scrutinizing these three variations, I came to the conclusion that ifKitchen Wisdom is like Cliff Notes, The Way to Cook is like the OED, and Cooking at Home is like a play with too much dialog and not enough action. (This humble opinion comes from someone who is fascinated by the whys and whats behind a story but also just wants to get dinner on the table in less than an hour.) As it turns out, sole meuniére is a fairly simple and straightforward dish—there aren’t a lot of steps and we finished cooking the whole meal in a little over a half an hour. 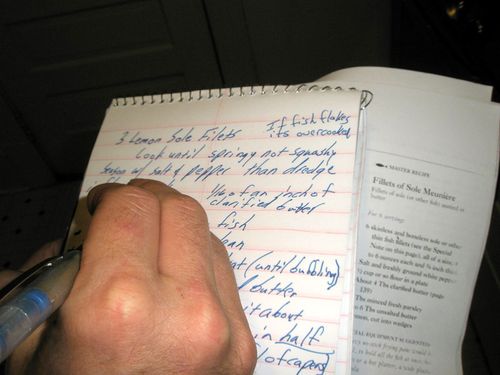 In Julia and Jacques Cooking at Home, each chef waxes poetic about the authentically wonderful Dover sole which is only found in the English Channel and “other faraway waters”—while acknowledging that it is “frequently unavailable and always expensive.” For a special-occasion meal, buying Dover sole is certainly cheaper than a flight to Paris (as Julia and Jacques note). However, we simply couldn’t find it. The cookbook does recommend lemon sole as a particularly good alternative and we ended up using fillets of this variety, which were scrumptious. Cooking at Home also suggests that you can either debone and skin the fish yourself or “let guests have the enjoyment of doing it themselves.” Luckily for me (a little squeamish about disassembling animal parts after eight years of vegetarianism), the fish was already cleaned, deboned, and skinned when we purchased it. 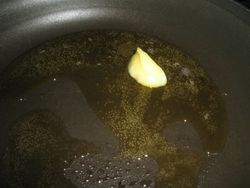 Ghee melting in the pan.

In addition to trying lemon sole for the first time, this recipe also introduced us to the wonders of clarified butter. Clarified butter has a higher smoking point and therefore doesn’t burn as easily when sautéing. Bryan (my husband) accosted a woman in the grocery store who looked like she might be able to reveal the mystery of just what clarified butter is and how to find it. After a lengthy description about how to make it yourself (heating butter—not browning it!—and then skimming off the foam, straining it, skimming it again…) she finally saw the panic in his eyes and let him in on a little secret: ghee in a jar is basically the same thing and could be purchased on the next aisle over. 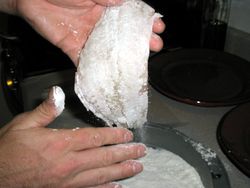 We seasoned the fillets with salt and pepper and then coated them with flour leaving “just a dusting.”

As the ghee warmed up, we prepared the fillets. Julia suggests that we dry the fish with paper towels and warns “if you dredge more than a minute or so in advance, the flour gets wet, lumpy, and gummy—a doleful mess you certainly don’t want on your fine fresh fish.” The lesson here—that it’s all about timing—is one I find myself having to learn over and over again in the kitchen. This time, I was happy to have Julia’s stern but illustrative warning to guide me.

We cooked the fish until it was “springy rather than squashy.” (I love Julia’s humorous but entirely accurate descriptors! Even in our shorthand version of the recipe, “springy not squashy” and “swishing it about” made it—because they are the best way to describe what is happening. We “tossed in” a spoonful of capers, we didn’t merely “add” them. It isn’t flowery, it is USEFUL.) One caution on determining whether you’re at the point when “the fish begins to take on a light springiness to the touch”: Bryan used his finger for this test and beyond the springiness (and it was, indeed, springy!), he also felt searing pain from the heated butter. 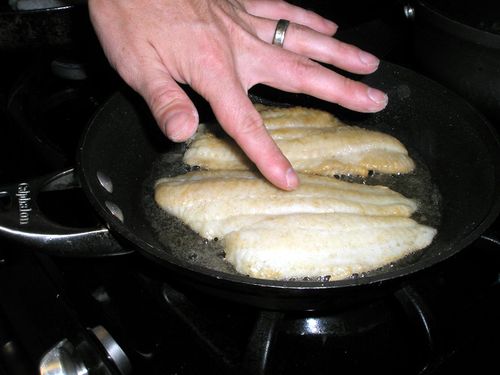 Testing the firmness of the fish.

Julia warns that “if the fish flakes, it is overdone.” We found out the hard way that our third (backup) fillet was needed when one split in half on its way from the pan to the plate. We weren’t heartbroken at the prospect of gobbling up a slightly less pretty—but no less delicious—piece of fish.

When the fish was done, we wiped the pan clean with paper towels per Julia’s instructions and began the browned butter sauce. We don’t have a dishwasher and any step that reuses a pan and cuts down on the clutter at the end of the meal is appreciated!

Once the butter was browned, we followed the instructions from Kitchen Wisdom, which read: “remove the pan from heat, squeeze in the juice of a half a lemon.” Perhaps “remove the pan from heat” was worded a little too weakly or maybe should have waited a minute for it to continue cooling because the whole thing seemed to explode in a display of butter-lemon fireworks—all over the stove, the wall, my arm. Ouch. (Note that The Way to Cook suggests serving the sole with lemon wedges rather than adding juice, perhaps a safer alternative.) The pain, however, was worth it for the delectably tangy and lush sauce that resulted.

The final product, served on the red dishes which have indeed turned out to be a better choice for us than fine china.

Tossing in capers as a final touch, we served the fish with a green salad, steamed fingerling potatoes, and broccoli rabe (although green beans—or haricots verts to up the French factor—would probably have been a better choice). The ghee gave the fish a rich—but still light and crispy—finish that has sold this olive oil devotee on the magical properties of butter.

Do try this at home!
We invite you to join with us in this celebration of Julia Child’s life, work, and contributions to American culinary history. Please share your experiences making Julia Child’s recipes by posting your story, photos, or video on our Tumblr page for this recipe series. Don’t forget to check back next week for waterzooi.