Citizenship Day Naturalization Ceremony, September 17—it’s just another public program at the museum. I spend the morning working with fellow staffers from our facilities, program, special events, press, and security forces on the set-up. While we’ve memo’ed each other for weeks about the ceremony in the museum’s central “town square,” AKA Flag Hall, and each contingent has its assigned and assumed responsibilities and procedures, we all chime in on new strategies as the physical space takes shape.

We install the stage and backdrop, secure the flags and holders, debate the best placement for the podium. We arrange the chairs for the candidates, VIPs, guests, and public, place the easels and tables for registration, rehearse the Color Guard formation (and then rearrange the chairs to allow sufficient room so that the flags don’t tickle the noses of those in the front row). We check on the placement of flowers and pitchers of water in the reception suite, tag the seats for specific speakers, check the sound, place the programs, and put out ropes and stanchions to protect the set-up until the 1:30 p.m. ceremony begins. All is in place when the museum opens at 10 a.m.

By noon, we drift back. The chief producer from my office consults with her counterpart from U.S. Citizenship and Immigration Services, Public Affairs opens its media table, USCIS staff welcome the new citizens-to-be as they check in. The Department of Homeland Security flag is integrated into the Color Guard’s line-up. Protection Services officers confer: when to close the Star-Spangled Banner gallery, how to direct visitors around the stanchions, whether to open more seating to the public. My office mates, well-versed in visitor services and program production, explain to visitors that September 17 is the anniversary of the signing of the Constitution in 1787 and that they’re welcome to observe. 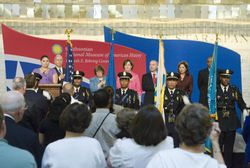 And suddenly, just like that, it happens—it’s no longer another program, but a goose-bump inducing history-in-the-making, a pageant filled with deeper emotions and loftier thoughts than “Is the stage skirting properly fastened?” Seemingly everyone—in Flag Hall and on the third-floor balcony—is caught up in the moment. From the measured cadence of the Color Guard placing the flags, the beautifully sung national anthem, and the words of welcome from the Hilda Solis, U.S. Secretary of Labor—and daughter of immigrants—we all are part of this solemn rite.

Collectively, the people around me murmur incredulously at the range of countries (19) that the 26 candidates come from and that more than 8,000 people would become new citizens on the same day across the country. Mostly, though, we marvel at the oath of allegiance they collectively swear: to give up all “fidelity to any foreign prince, potentate, state, or sovereignty” and promise to “bear arms on behalf of the United States” and to “perform work of national importance . . . when required by the law.” These are huge promises! 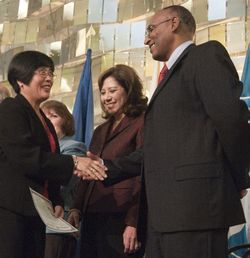 Our director encourages the new citizens to consider sharing their particular stories with the museum—he admits we have lots of objects and historical recountings from immigrants of previous generations but not as many in the recent past.

Afterwards, we take photos of excited families with their new citizens and offer congratulations to them, with their big grins and new certificates. Many visitors admit they’ve never attended such a ceremony, and seem both sobered and exhilarated at the same time to have witnessed this one. Several come up to thank me—the museum—for presenting the ceremony, to say how appropriate it is to have it here, and how glad they were to have happened upon it.

As am I. My immediate and extended family includes several naturalized citizens, and I know my life is far richer because of them. I look forward to preparing and attending future ceremonies, knowing that it’s how America’s future will be enriched, too.

Susan Walther is a programs coordinator in the Museum’s Office of Public Programs.