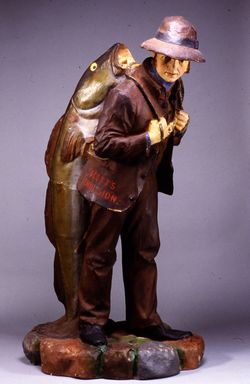 Advertising figure made by the National Papier Mache Works of Clinton, Iowa, ca 1900.

In the 1958 film Rally ‘Round the Flag, Boys! starring Paul Newman and Joanne Woodward, Newman, a Connecticut commuter/husband sadly recollects the lost appeal of his wife’s (Woodward’s) pink peignoir after she spilled her son’s daily dose of cod liver oil on it. Cultural references to cod liver oil are rare these days, as rare as references to pink peignoirs. But what better testament to the notoriously noxious quality of cod liver oil could there be than this–that the allure of the pink peignoir was forever spoiled by the spill, and could not be restored–even after repeated washings?

I have been intrigued by cod liver oil ever since I encountered the “Man With a Fish on His Back” in the back corner of the old period Drugstore exhibit at the National Museum of American History. The man is made of papier mache and stands over 5 feet tall; the fish he carries on his back, a Norwegian cod, is as big as he is. The figure served as an oversized advertisement for a medicinal cod liver oil product called Scott’s Emulsion, and it probably stood prominently in a drugstore window some 100 years ago.

The man with a fish on his back was also reproduced on advertising trade cards and booklets, and printed on the packaging and embossed on the bottles of Scott’s Emulsion. Prolific advertising made Scotts Emulsion one of the most successful patent medicines of the late 19th and early 20th century, and made its manufacturers, Alfred Scott and Samuel Bowne, very wealthy men.

Cod liver oil has a long history of use as a medicine and health product, a history that is still going on today. Its popularity has waxed and waned with changing medical knowledge and cultural preferences, but it has survived—Scott’s Emulsion is available today in nearly its original formula (although you will need to order it from Indonesia).

When Scott and Bowne began marketing their emulsion in the 1870s it was widely used for “consumption” and all “Wasting Diseases,” which would have included tuberculosis, a leading cause of death at the time. In the early 20th Century the marketing changed dramatically, after the discovery of vitamins and the role they play in promoting healthy growth and preventing diseases such as rickets (caused by a deficiency of Vitamin D). Cod liver oil is one of the best natural sources of vitamins A and D. Soon every mother was admonished to give her children a daily dose of the oil—a practice that began in the 1920s and continued well into the 1950s: hence the reference in the film about Paul Newman’s and Joanne Woodward’s suburban Connecticut home. 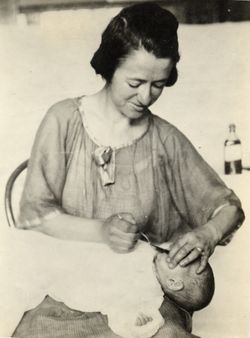 “When babies don’t swallow their daily dose of cod liver oil, their mothers are usually to blame … The stuff doesn’t taste like candy, so infants sometimes rebel. The mother pictured is using the proper technique and firmness in feeding her baby, however – and the child is taking his medicine without a whimper!”

Yet the problem with cod liver oil remained its vile, nauseating, oily quality and taste. Throughout its history, along side any mention of its medicinal virtues one can find numerous, ingenious suggestions for how to get a patient to take it and keep it down. Scott and Bowne partly solved the problem by producing an emulsion—a mixture of 50% oil with sweet glycerin and other ingredients. They advertised their product with the slogan “as palatable as milk.” Mothers in the 1930s were given strict instructions as to how to get their babies to swallow the stuff straight. This photo from our Science Service photo collections was used in a government child care publication.

Today, vitamins are synthesized and available in relatively tasteless tablets or added to other foods such as in Vitamin D fortified milk. However, due to recent medical research extolling the benefits of the Omega-3 fatty acids, oils from cod and other fish are again a very popular health product.

If you want to see the “Man with a Fish on his Back,” he is on display in the museum’s Marketing Medicine display case, near the gift shop in the first floor lobby. Rally Round the Flag Boys is available on DVD, and although by no means a great film, its flaws are easily overlooked for the pleasure of watching the romantic sparks between Newman and Woodward, as they overcome numerous challenges to their marriage, including an “other woman” (played by Joan Collins), and from spilling cod liver oil.