On the bottom edge of this pigment print (a type of digitally printed photograph) by Robert Weingarten, is the text “29 Oct 69 22:30 Talked to SRI Host to Host.” It seems rather innocuous but, in fact, the quiet success it records enables you to read this very blog. Forty years ago, the first Internet message, under the supervision of Leonard Kleinrock, was sent to the Stanford Research Institute (SRI) from the UCLA computer lab. The “CSK” you see on the right edge of the image stands for Charley Klein, who recorded the log entry. According to Kleinrock’s Web site, they crashed the system the first time they tried. The message that was sent was simply, “lo”, the first two letters of “login.” They succeeded an hour later. 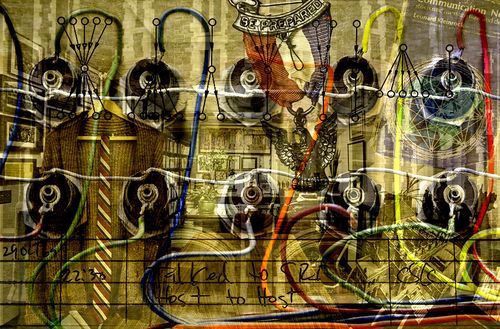 This photograph was not collected for its Internet story, however. It is part of series of images by Weingarten who asked his subjects, all noted American icons, “What makes you who you are?” His subjects supply him with a list of meaningful ideas and objects. Weingarten then photographs those items from the lists and brings them together digitally to create a visual biography.

In this translucent composite are the diagrams—see those circles and arrows?—from Kleinrock’s 1963 Ph.D. dissertation in which he developed the mathematical theory of packet networks that is the technological underpinning of the Internet.

The very wires that sent the message are visible in the image, a filter that you look through. The brick exterior of the UCLA lab is also used as an overall texture. Leonard Kleinrock is not a household name to most of us, so—in case you needed a bit of a hint as to the subject of this photo—there is a clue in the upper right corner in the cover of a book with his name on it. Anyone for a quick read on stochastic message flow?

See Kleinrock’s office receding into the background? You can imagine him donning the sweater and tie on the left when he needs to fill his professorial role at UCLA. The Eagle Scout award illustrates one of the defining experiences his life. As if this photograph isn’t enough of a visual puzzle already, a mind-bending print by illustrator M.C. Escher occupies the lower right corner.

What makes you who you are? What would you include in your visual biography? Perhaps you’ll help us celebrate this technological anniversary by sending the museum your own Internet message? You have a lot more options today than Leonard Kleinrock had in 1969. You can leave a comment at the end of this post, add a photo to our Flickr group, post a message on our Facebook wall, or—if you’d like to keep it short and sweet in honor of "lo"—send us a 140-character message on Twitter.