Putting names with the faces of braceros 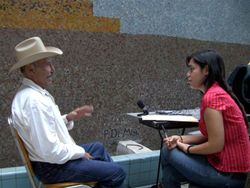 I was interning at the National Museum of American History when I first encountered the photographic images of Leonard Nadel, who spent several years photographing bracero communities throughout the Southwestern United States and Mexico. I looked through the collection anxiously, thinking that perhaps I would find an image one of my uncles who participated in the Bracero Program. I never found them. But as we started collecting oral histories the possibility of coming across the men featured in these pictures seemed plausible. Like my own relatives, these men had names and I wanted to identify them. I felt that by adding names to faces it would somehow make them more human.

I began working on the Bracero History Project as a graduate student at Brown University. Although I had taken seminars in public humanities and was trained to carry out oral histories, nothing could prepare me for working directly on a national project focused on such a controversial part of American history. My experience working with ex-braceros forced me to grapple with questions of trauma, marginalization, and the role of public history. 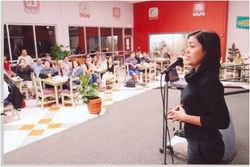 We started the collecting process by inviting braceros to town hall meetings in several towns in the Southwest where we projected images of the Nadel photographs to explain the project. As the images appeared on the screen, the ex-braceros—who were now elderly men—added their own commentary. The men looked at the images with conviction—“That’s what really happened”—as if they needed to affirm to non-braceros the reality of their experiences. Many of the men felt the history of the Bracero Program was forgotten in a national amnesia about Mexican guest workers, and these photographs served as a reminder of their stories. In several of the town hall meetings former braceros asked to view the images a second time. They cherished the postcards we distributed featuring Nadel images and often asked for additional postcards for family members. Eventually, curator Steve Velasquez decided to make large prints out of the images so that ex-braceros could view at their own pace.

One image in particular from the collection always caused a stir: a cropped image depicting DDT sprayings of braceros. Nadel had cropped out the naked body of braceros from the waist down and we decided to show this version in consideration of young members of the audience. We chose this photograph because we were not sure how ex-braceros would react. I imagined that if I was the young man in the forefront of the photo, I would not want to encounter the uncropped image for the first time on a screen, sitting in an audience with my family members. We grappled with questions of ethics in public history. 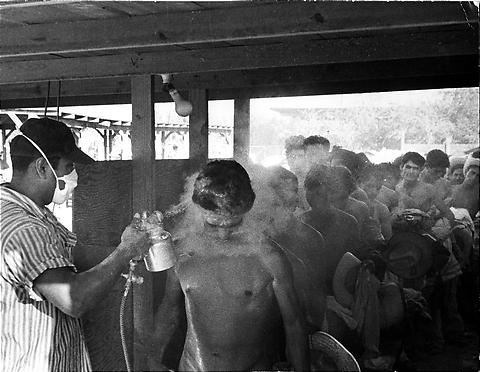 We later learned that the men wanted and needed to see the photos depicting the most humiliating circumstances. Men in the audience explained that the sprayings, along with medical inspections, were the most dehumanizing experiences of the contracting process and perhaps of their entire experience as braceros. An ex-bracero angrily explained what had been cropped—that the workers were naked—and argued that people should see the complete image. He felt we were hiding the truth with the cropped photograph and that the truth needed public exposure. “Where were human rights then? Were we not human?” I realized then that it was through the most dehumanizing experiences that many braceros made a claim to their humanity. 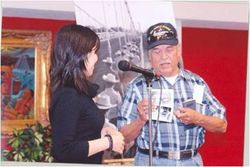 Some of the men’s voices would crack or their eyes would well up with tears as they pointed at the photographs and said things like, “I worked like that.” Because the meetings were large, I imagined the possibility that some of the braceros depicted in the images might be in the audience. I wanted someone in the audience to stand up and say, “That’s me.” It never happened but it came close.

For the meeting in El Paso, several of Nadel’s images were enlarged and placed around the room. The faces of the braceros in the photographs were almost life size. As families came in they viewed the enlargements and some even touched the images. It was there that an older gentleman pulled me aside and told me, “That is my brother, Santos, in that picture.” He explained with sadness that his brother had passed away and he had no images of his brother. He asked for a copy of the photograph. My heart sank at the news his brother was no longer alive. But I was encouraged that at least I finally had a name to one of the men I had so often looked at. Santos was no longer another face in a sea of anonymous braceros.

Mireya Loza is a fellow at the National Museum of American History.

Posted in Food History, From the Collections, Now on View