Today’s post is the tenth in a series of weekly Julia Child recipes. This week, Jan Lilja, Associate Director for Management and Museum Services, tries her hand at La tarte des demoiselles Tatin . . . with some, shall we say, “artistic” results.

On an episode of The French Chef Julia declared (while tossing one over her shoulder) that the rolling pins found in most American kitchens were “toys,” and proceeded to show her television viewers what real rolling pins were all about. Julia had six heavy-duty rolling pins—each distinctive—stored in a copper stock pot in her pastry pantry, just off the main kitchen. A rolling pin is an essential tool for making La Tarte Tatin, this week’s recipe. We recommend using the fourth version of this recipe, as published in The Way to Cook. Julia declared this version the “definitive recipe” because the Tarte came out perfectly, not collapsing during unmolding (as seen on The French Chef episode) or sticking to the pan.

I don’t own Mastering the Art of French Cooking, but do have a second hand copy of From Julia Child’s Kitchen that I’ve never used, so I happily volunteered to try the Tarte Tatin recipe for this museum blogathon. I was a bit apprehensive—having cooked for my family for almost thirty years I generally cook without a recipe. I cook from the senses: taste, smell, feel, and intuition.

I wasn’t sure that I would have the mental discipline to follow an extensive recipe without change or modification. However, the book mentioned that Tarte Tatin was originally created by les Demoiselles Tatin who lived in the Loire valley. Good karma, since I was an overseas student in the Loire valley many years ago. I resolved to try, hoping that the end result would be a tarte les Demoiselles Tatin would recognize, as opposed to something in keeping with Les Demoiselles d’Avignon. (If you don’t know, Google it!) Especially since this tarte was slated to be dessert at the birthday dinner for my sister Karen and her husband Kevin—both born in October. Bon courage, alors. 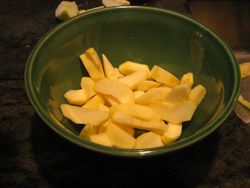 So, I actually read the recipe most of the way through before starting. My first issue with the recipe came up right away with the first line and the first ingredient. Julia recommended using Golden Delicious apples—usually bland and a little mushy—a bad choice a mon gout. So I made the first modification—I used mostly Golden Delicious but with a few organic Granny Smith apples for flavor and texture. Further, Julia’s recipe called for using vegetable shortening in addition to butter in the crust. Crisco? Could she be advocating Crisco? Phut. No way. I deviated again—substituting Smart Balance butter blend for the amount of vegetable shortening in the recipe.

I happily found as I went along that my free-form modification and breezy cooking is perhaps a good thing. For example, the recipe called for kneading the dough—but didn’t mention the need for flour on the hands and the pastry board, which I knew to do anyway, increasing my confidence. The dough formed quickly as it was supposed to and I put it in the fridge to chill for the day. 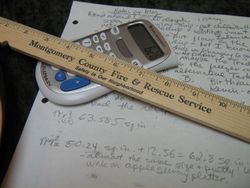 Hours later, upon my return to the kitchen, a major decision awaited concerning the pie pan. Tarte Tatin has to be cooked in an oven resistant frying pan—the tarte is heated on the stove top, cooked in the oven, and returns once more to the stove top for finishing. It is a fuel-intensive dish—probably a huge energy footprint for a dessert. The recipe called for a 9” x 2” deep flame-proof frying pan. No such thing in my kitchen. But I did have a secondhand copper oval-shaped frying pan—two inches deep. Would it work? Incredibly, from the deep recesses of my mind I remembered that the area of a circle is equivalent to pi r2. Measuring the radius of my oval fry pan (width wise) and then adding on an additional 25% area to compensate for the oval ends was about the same as pi r2 for a 9” frying pan! Hurray! Basically, I had no choice in the matter—but it’s always nice when the data analysis confirms one’s priors—I wasn’t a CBO budget analyst for nothing. Heh, heh. 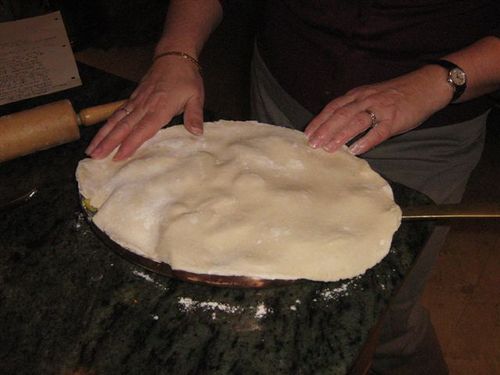 The pan, with the crust cover, is then placed on the stove to cook until the apple juice “thickens into a syrup.” What Julia doesn’t say—but assumes that you will figure out—is that one has to peek, using a spoon to push the crust aside and check. Then the pan pops into the oven for 30 minutes or so, comes out when the crust is golden brown, and goes back on the stove to boil away more liquid. 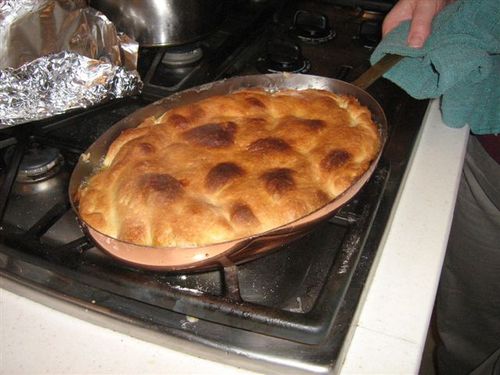 “When there is no more liquid to boil away” is when the tarte is ready to invert onto a platter, according to the book. This is not great advice. When there was no more liquid to boil away was the same nanosecond when I started to smell carbon. Not a good sign. We quickly removed the pan from the heat, but neither my sister nor I could manage the one-hand flip of the pan onto the platter—the birthday boy had to help with that. 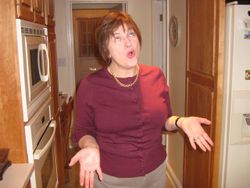 Then—quel dommage—the tarte did not come out in one complete piece (unlike pineapple upside down cake, which always works).

Rather—some stayed in the pan. This must be the standard operating hazard for this tarte as Julia advised in the cookbook that if some of the tarte stayed behind in the pan to simply scoop it out and mush it on to the top.

Well, she didn’t exactly say mush—but that is the technique!!! Yes, it ended up looking a little “demoiselles d’Avignon” after all. Sigh. But the birthday couple took it in stride. 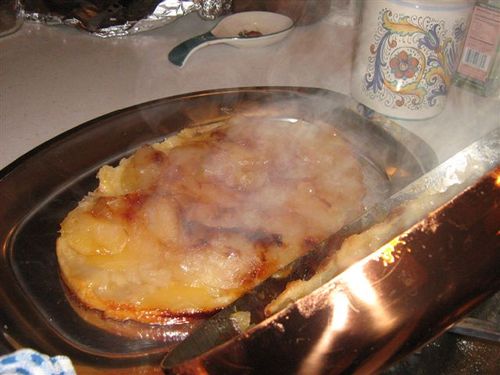 The taste? The value proposition? Sorry Team Julia—I remain unconvinced about this cookbook and La Tarte Tatin. I find there is fresher taste, more nutrition, less time involved, and indubitably a lower energy footprint for my tried-and-true Mennonite cookbook apple crisp with oatmeal crumble topping. Next time I will bake the apple crisp in the copper oval fry pan for a little extra sophistication and flair francais—but really, made with tart autumn apples and brown sugar it just tastes better than this Golden Delicious tarte. Below is my highly recommended apple crisp alternative for casual cooks to enjoy this autumn.

Combine and put in greased casserole:

Mash together with a fork:

Sprinkle crumbled mixture on top of apples and bake 35 minutes in 375 degree oven.

Jan Lilja is the Associate Director for Management and Museum Services at the National Museum of American History.