A Pilgrim or a poseur?

In reality, the English dissidents on board the Mayflower called themselves “saints,” not “pilgrims,” and landed on a beach in Provincetown, not a rock in Plymouth. They had a tumultuous relationship with the native Wampanoag tribe marked by suspicion and accusations of theft on both sides. Tisquantum, the man called Squanto by the colonists, had been captured and made a slave by English traders years before, and returned to find his people almost entirely decimated by disease. He used his skills as a translator and expert hunter to gain favor with the English and helped them rebound from the disastrous winter of 1620, when about half of the colony died of starvation and disease. Around harvest time in 1621, the settlers’ fortunes had improved to the point that they held a three-day feast of thanksgiving attended by a group of Wampanoag men who may have been trying to negotiate a peace agreement. The Indian men brought five deer to the feast, which probably also included cod, goose, dried corn, and fruit. There is no historical record of turkey, pumpkin pie, or football. What’s more, the Massachusetts Thanksgiving wasn’t the first held in the modern United States. (For a historically accurate tale of Thanksgiving, check out Thanksgiving in North America: From Local Harvests to National Holiday from Encyclopedia Smithsonian.)

Thanksgiving was made a national holiday in 1863 during the Lincoln presidency. At that time, a lack of serious historical scholarship and prevailing ideas about Native Americans contributed to misconceptions about the historic holiday. Today we still have images of pilgrims in hats and with buckles on their shoes-images conceived by Victorian-era artists and not based on any historical facts. 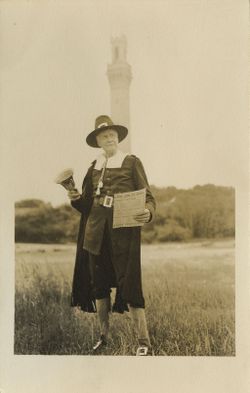 Earlier this month, I discovered this photograph of a pilgrim in the Photographic History collection. Okay, so the photo doesn’t date to 1620—photography wasn’t patented until 1839. And the scene is a little anachronistic, showing a man in a stereotypical Pilgrim costume, holding a newspaper from 1940, and standing in front of a 1907 monument.

The photograph was taken at a time when the Pilgrim Thanksgiving myth was at its height of influence, but also a time when scholars were rewriting the history of the holiday to be more accurate and inclusive. Although we don’t know why this photo was taken, it might have been for an advertising campaign, a souvenir from a trip, or simply a visual gag. The tower in the background, the Pilgrim Monument in Provincetown, Massachusetts, was designed to resemble the Torre Del Manga in Siena, Italy, a structure as American, one critic said, “as the Leaning Tower of Pisa.” Contemporary architects derided the monument for its irrelevance to the story of the Pilgrims, but of course, much of what they thought they knew about the subject was incorrect as well.

History is a constant work of addition and rethinking, and Thanksgiving is just as controversial a topic as any other. There is something about this photo, however, which speaks to the way that holidays connect us to our past despite the changing nature of its interpretation. Even if the version of the Thanksgiving story that you heard in school is missing a few details, the legacy of the historical circumstances surrounding the holiday invite reflection on the American story in the quest to understand the American experience.

Posted in From the Collections, Religion in America, Native American History