Snake oil is no balm for America

There is no shortage of snake oil in America. Whether sold by politicians as endless campaign promises, or by spammers tempting us with virility enhancers and other elixirs of life, we are all too familiar with snake oil and its salesmen.

What America needs is a good, honest BALM . And I have just the thing—a little something for most anything that ails you—in our patent medicine collection at the National Museum of American History. Currently we have over 600 remedies available (for browsing only!) on our Web site Balm of America: Patent Medicine Collection. Here you will find humor (probably unintentional), snake oil salesmanship, and quackery, but also “regular medicine”: common remedies used to alleviate symptoms and pain.

I have spent a lot of time digging up bits and pieces of the stories behind these products and the people who made them. It can be fun and frustrating; while some products are well known, others have come and gone, leaving few traces. Here are some facts and speculation about two such products:

Balm of America was a cough and cold remedy offered by the Boston apothecary, Thomas Hollis, in the mid-nineteenth century. The name, suggesting a cure for all the ills of our nation, seemed a perfect fit for our site’s title. 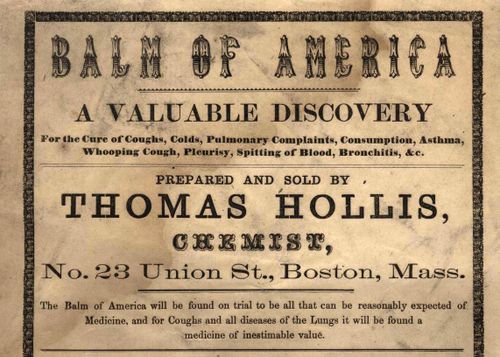 Balm of America broadside, mid-19th century.
Note the disclaimer at the bottom: “The Balm of America will be found on trial to be all that can be reasonably expected of Medicine…”

To add to the product’s allure, the name also suggests that most-famous-of-all-balms, the “Balm of Gilead,” a substance highly valued for its medicinal value since antiquity. [“Is there no balm in Gilead; is there no physician there? Why then is not the health of the daughter of my people recovered?” Jeremiah 8:22]

Was Hollis selling snake-oil? His establishment in Boston was one of the oldest (est. 1821) and most widely respected, and his other proprietary mixtures generally had rather simple, prosaic names: Hollis’s Lozenges, Pectoral Syrup, Horse Liniment, Syrup of Sarsaparilla, etc. 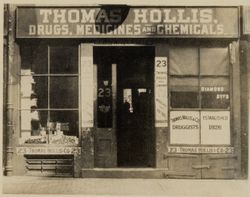 Hollis Store, ca 1923. The dark blob of shadow at the top is from his large mortar and pestle sign.

Then I came across this: Populus candicans is called Balm of Gilead in America . The buds of this common tree, also known as balsam poplar, exude a resin that is used medicinally, especially for coughs and pulmonary complaints.

Perhaps Hollis’ cough cure referred simply to this native species, the “Balm of Gilead” in America. Many local folk remedies found their way into mainstream medicine and became widely distributed. Maybe this was Hollis’ “Valuable Discovery.” In Appalachian folk medicine, Balm of Gilead Buds were known as “Bam Gilly Buds,” and they are widely available today in many herbal remedies .

Of course this is pure speculation on my part. No government regulation existed to require Hollis to reveal the ingredients in his preparations, so his formula remains a mystery.

Sixty years later, the proprietors of White Eagle’s Indian Oil Liniment were not as free of government oversight.

I found the liniment listed in the American Medical Association's 1921 Nostrums and Quackery section on “Misbranded Drugs and Foods: Convictions Under the Food and Drugs Act Government chemists found no rattlesnake oil in the liniment (mostly kerosene), and the claim that it would cure diphtheria, hay-fever, goiter, deafness and rheumatism was declared false and fraudulent. The proprietors of the White Eagle Medicine Company of Piqua, Ohio were Aaron P. and Caroline McCarty. They changed the name and label on their product, paid the fine of $25 each, and were back in business. 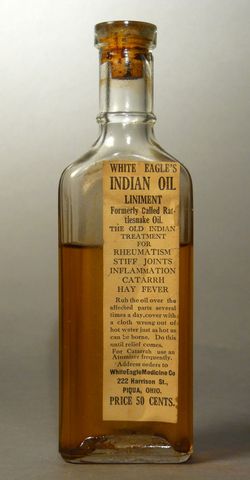 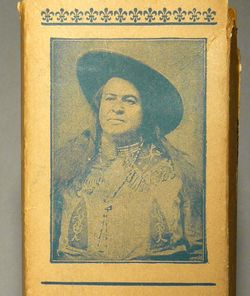 I was able to learn more about Aaron P. McCarty through his famous son, heavy weight champion of 1913, Luther McCarty. Luther died tragically in the ring, on May 24, 1913, killed by a blow from opponent Arthur Pelkey. News articles following the death revealed more about the father: A. [Aaron or Anton] P. McCarty traveled about the country under the name of Chief White Eagle selling his rattlesnake oil. Although he was widely believed to have Indian blood, he admitted that he was of Scotch-Irish descent.

Worthy balms or worthless nostrums? Honest apothecaries or snake oil salesmen? Take a look at our collection and let us know what you know about these products and their proprietors.