The pit, the pacifier, and the pennies

When curator David Shayt passed away around the time the museum reopened in fall 2008, I inherited one of his many collections. Which is why I found myself this morning at the bottom of a deep, dark shaft in the museum’s basement with a supervisor, a lighting technician, and a hastily-recruited volunteer all crammed into the tiny space.

We were in the “pit” for the gigantic 13-ton piston in the Power Machinery exhibition, which is the only exhibit hall left of the original 1964 museum exhibits. The piston is from a colossal 1904 steam engine that made electricity for the New York City subway; it remained in use into the 1950s before coming to the Smithsonian. 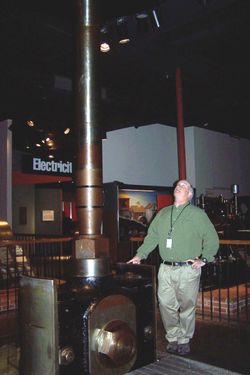 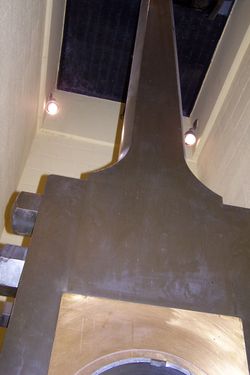 There’s a grate on the floor of the exhibit hall, through which visitors can peer down at the foot of the immense steel “dinosaur bone” from an earlier epoch. They can also drop stuff through the grate, down to the floor 15+ feet below. The top of the piston goes up almost all the way to the ceiling, 14 feet overhead. 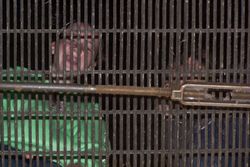 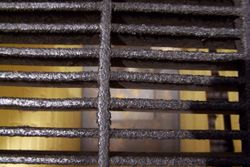 We went down there to clean out the bottom of the pit and replace burned-out bulbs in the three lamps that illuminate it. Judging from the depth of the dust covering the pit floor and the fact that all of the bulbs were shot, the pit hadn’t been visited since before the museum closed in the autumn of 2006. Maybe even longer . . .

Just getting there was a challenge in itself. Peter Liebhold, our division chair, checked out a room key at the Security Office and led us into a seldom-visited objects storage room in a faraway corner of the basement. We walked to the back of the room, around tall shelves packed with collections of old instruments and obscure paraphernalia. Behind one of the shelving units was a long wall with a narrow corridor to a door I’d never seen before. That door led to the pit.

The volunteer and I swept out the dust, torn pieces of paper, exhibit guides and other general detritus. Overhead, we could hear stray bits of conversations of staff arriving through the entrance at the back of the museum. I may have failed once or twice to stifle an urge to call out for help, just to see what the reaction overhead might be. Among the treasures on the deck was a well-used plastic baby’s pacifier, a purple plastic egg filled with tiny metal balls (like a jumping bean), and a handful of pocket change. After we finished, our lighting technician—Irvin—wrestled his 8-ft ladder through the 7-ft door and quickly put new bulbs into the lamps. I don’t think Irvin likes small, dark confined spaces at the bottom of deep holes. 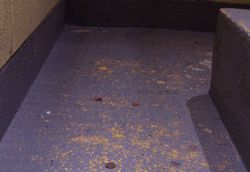 Note to the public: Next time you throw money into the piston pit, please make it paper currency, for a bigger payoff (it’s also easier to pick up from the dirty floor than coins)!

Paul Johnston is a curator in the Division of Work and Industry at the National Museum of American History.