Where to Find the Master Recipes

Valeska’s Story: How Julia and Jacques Helped Me to Relive my Vacation

I never cared much for zucchini and never knew quite what to do with eggplant. Somehow it never entered into my repertoire, although I love to cook and I am passionate about veggies. (Except if you count my stint in a small commercial kitchen that delivered to health food stores, where I mashed baked eggplants into 30 pounds of Baba Ghanouj.)

My husband, Tom, and I recently took a trip to Greece and Istanbul—lands plentiful with fresh vegetables and yummy food of all kinds. I had eggplant every way offered: sliced and baked with garlic and tomatoes, mashed and wonderfully creamy, fried in chunks. I was determined to continue my new love affair with the eggplant (aka aubergine) and to cook some every week. Slices, marinated in olive oil and lemon juice became an easy end-of-summer favorite.

And so I had eggplant in mind as I was thinking about how I too could pay homage to Julia and her kitchen at the museum. My colleagues exclaimed that they knew exactly the eggplant recipe I needed to try. I took one look at the photo and the list of ingredients and was sold.

Two days later we made our weekly pilgrimage to the Takoma Park Farmers Market and found the last perfect eggplants, zucchini, and tomatoes—the remains of summer’s splendor. 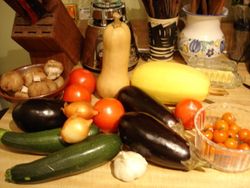 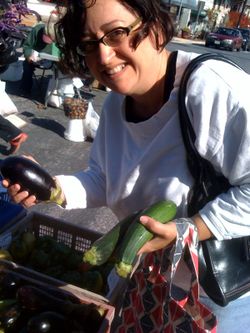 That night, while Tom vacuumed every crevice of the house in an attempt to eradicate the carpet beetles that were already munching on our new Turkish rug, I set out to make a comforting, Julia-inspired dinner.

I followed the recipe but made a few of my own additions—small onions, sliced garlic, and baby bella mushrooms—especially since in the book Julia said that was OK. It took a lot of chopping. If this is the easy version of ratatouille, I don’t want to know what the difficult version is like. Or maybe I am too focused on instant gratification. While the eggplant slices baked, I chopped the mushrooms and onions. While they roasted, I sliced and salted/peppered the zucchini and tomatoes. 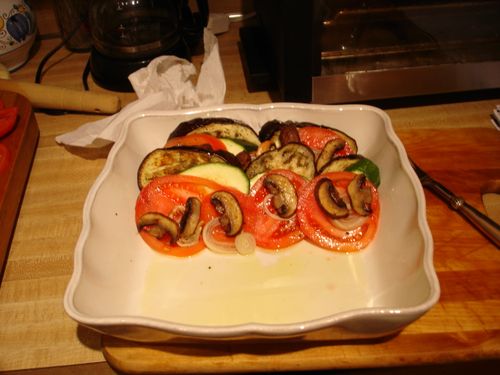 Then it was time to assemble the dish and I have to confess that I had to Google a picture because, as a highly visual person, I was a little slow on the uptake that the slices were not supposed to be laid flat but rather leaned upright against the edge of the baking dish. I saw the picture and went, “Doh!” My apologies to Julia for not using a regulation gratin dish but I had to make do with this nice square baking dish I had on hand. It looked quite pretty, if I do say so myself.

Fifty minutes later (I had to add a few minutes as I sliced the zucchini a bit too thick), voila! It still looked pretty, and with the entire house smelling enticingly yummy, down we sat and scarfed up as much as we could hold. 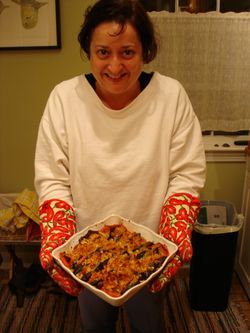 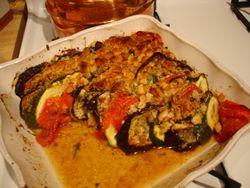 One note of caution, don’t try to microwave the leftovers for lunch, they turn rubbery. Reheated in the oven, the dish is just as yummy as the first time. I’ll make this one again, often.

Valeska Hilbig is a member of the Public Affairs Office at the National Museum of American History. She has a hard time letting go of summer.

When I heard that ratatouille was one of the proposed dishes for our Julia Child Recipe of the Week series, I knew it was the one for me. I am not ashamed to admit that my familiarity with the dish was not due to any prior personal experience, but rather from the Disney/Pixar animated film of the same name. The movie is a family favorite and one that I still enjoy after repeated viewings. We even named our pet rats Remy and Emile after two of the movie’s main characters who also happen to be rats.

Ah, but Remy is a special rat. In addition to walking, talking, and getting into hilarious predicaments like any self-respecting animated character, he has a passion for fine food. As in Julia’s own story, Paris becomes the backdrop and inspiration for his emerging culinary artistry. He is guided by the spirit of a dearly departed local chef who seems to be channeling Julia when he reassures Remy that “anyone can cook.” In fact, though Julia Child is not mentioned in the film, in a way it seems to be all about her, or at least her philosophy of food and the joys of cooking. In the film’s climactic scene, Remy (with human help) attempts to win over the much-feared, impossible-to-please food critic with his signature dish—you guessed it—ratatouille.

Julia’s recipe promised that it would “perfume the kitchen with the essence of Provence” and also that it was fairly time-consuming for a vegetable dish. Both proved to be true (at least, I assume the former was true as I have yet to smell the essence of Provence in person). Regretting that we did not try the recipe earlier when local produce was still available at the farmer’s market, I picked up the freshest ingredients I could at the local high-end grocery store. 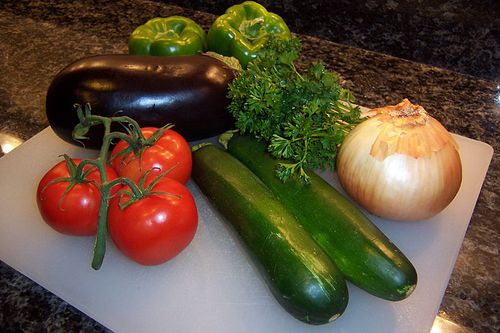 I was a little surprised that the recipe called for very little seasoning other than the vegetables – basically olive oil for sautéing and a little garlic, salt, and pepper. I am always fond of gourmet recipes that use ingredients I have heard of and which we actually have on hand. 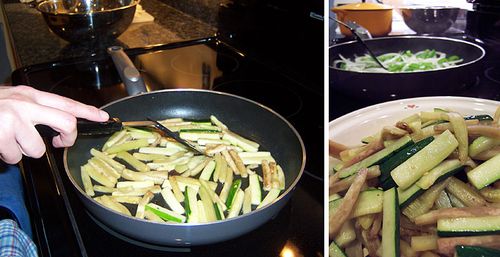 The first step involved slicing, salting, drying, and sautéing individual slices of eggplant and zucchini. This was more care than I am used to devoting to vegetables. But Julia said each step was important, so we forged ahead. Next we sautéed onions and green pepper, and peeled and seeded the tomatoes. 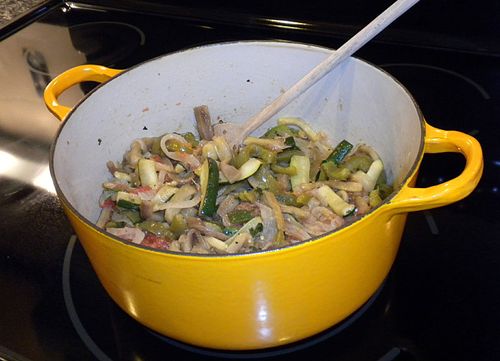 The final step of simmering the layered combination of vegetables offered the perfect opportunity to use one of the only truly great cooking implements we own, an inherited Le Creuset enameled cast-iron dutch oven.

We thought that the end result was delicious—though I might have gone a little heavy on the olive oil. As promised, it was even better the next day. Our three kids who only sometimes like vegetables were happy as well. Per Julia’s suggestion, we served it with roasted chicken basted in herbs and butter, and crusty rosemary bread. I’m not sure if our version would have knocked the socks off of a snooty French food critic as in the movie, but it was a wonderful opportunity to cook together with my wife (something we hadn’t done in a while) and for our family to enjoy an extra-special meal together. For me, that was a tasty outcome.