“Like the sun in all its glory suddenly breaking through the shades of gloom.” 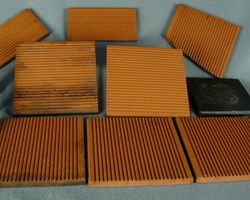 So wrote Julia Child after finally succeeding in making real French bread. Her struggle to achieve the elusive crunchy crust drove her and her husband Paul to Professor Calvel, of L’Ecole Francaise de Meunerie in Paris, who shared his secrets.

The trick was to simulate a baker’s oven, with a hot surface for the bread to bake on and steam to form the crust. Paul discovered he could line their big Garland range with quarry tiles, which held the heat beautifully. While the bread baked, he created a burst of steam by dropping a brick into a pan of water in the oven’s bottom. Thereafter, this small stack of quarry tiles remained on a shelf above the range, ready for use in making French bread, this week’s recipe.

On the wall in the hallway outside our offices hangs a 9-foot-long enlargement of twenty-two pages from Mastering the Art of French Cooking II. This poster-sized version of pages from chapter two on “Baking: Breads, Brioches, Croissants, and Pastries,” was removed from the Bon Appétit exhibition last July to make room for the newly-acquired wall of copper pots from Julia Child’s kitchen. As we hung the poster in our hallway, and on various occasions since, we’ve said to one another, “We really ought to try this sometime, you know.”

Well, opportunity called. As the last post in our recipe series celebrating Julia Child, we thought there could be no better way than to try to follow this marvelously detailed recipe for good, crusty French bread. We had long admired Julia’s persistence in puzzling out this quintessential taste of France for American cooks. Over two years’ time in the late 1960s, she and her husband Paul baked their way through 284 pounds of flour in their Cambridge kitchen, trying to perfect the techniques so she could tell us exactly what to do. Their failures were anything but, of course, and according to legend their lucky neighbors reaped the benefits of the myriad loaves that needed just a little more perfection. If you read the recipe you’ll learn the secret that had eluded them: adding a mist of moisture at certain intervals in the baking process is the key to forming the crusty crust.

So on the weekend before Thanksgiving we joined our colleague and original “Team Julia” member Rayna Green, to learn something new from Mastering. Rayna’s protests of “I don’t do windows, I don’t do floors, and I don’t bake,” fell on deaf ears. We couldn’t imagine trying this without her. 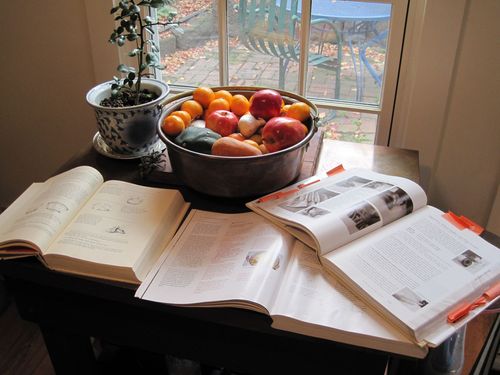 After reading the recipe several times and tallying up the hours recommended between risings, we knew we couldn’t do this in one day. So the grand experiment began on Saturday afternoon in Rayna’s sunny Capitol Hill kitchen, with Nanci and Rayna rolling up their sleeves and starting the dough. They consulted three versions of the recipe, from Mastering II, The Way to Cook, and Baking with Julia, on the theory that between the three volumes any and all answers could be found. 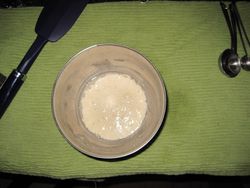 Right off the bat there was, well, a screw-up, resulting in our having to start the yeast a second time. In the first attempt we put the dry yeast in a bowl and added water. Had we had read the directions carefully we would have learned that Julia explicitly says to put the water in first, then the yeast. We decided to take more time to read the recipe and found it worked well to read out loud to each other. 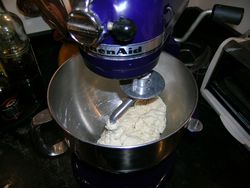 Rayna swore she had never used the dough hook on her stand mixer (“I told you, I don’t bake!”) and, sure enough, there was the sticker on the bottom warning users not to go above speed #2 when using the dough hook. But with the stand mixer and its pristine attachment at hand, we did NOT need to knead the dough, instead we let the machine make short work of the kneading step. 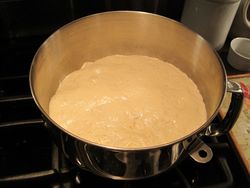 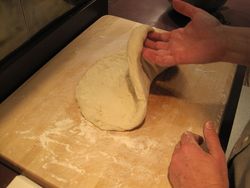 Julia states that the dough would require approximately 3 hours to rise. It was now around 3 pm so the second rise would have to begin sometime Saturday evening. The aim was to have the dough ready for forming the baguettes on Sunday morning. The reluctant baker convinced Nanci to take the dough home to Virginia overnight, where she could monitor the rising that was already underway and do the required folding to begin round two. This meant taking the rising dough out of Rayna’s warm kitchen and driving across the Potomac River to Arlington. Nanci is not a project manager for nothing: to protect the precious bowl of dough from the cold temperatures and famously bumpy streets of Washington, she turned on the seat heaters in her Mini Cooper and swaddled the bowl in layers of towels. 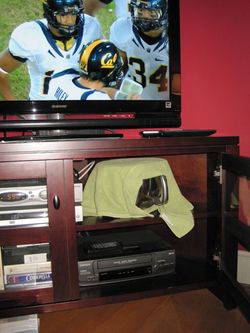 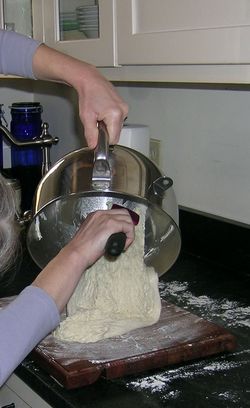 At home in Virginia with the dough finishing its first rising, Nanci discovered the warmest place in the house was inside the TV cabinet, where all the electronics so essential to modern life were humming away. It worked like a charm and the rising was completed a couple of hours later. She gamely handled the four folds in the next step, placed the dough back in the bowl, and covered it with plastic wrap.

Julia notes that if you don’t have the 70-degree room temperature recommended for rising, the process will just take longer. Nanci used this to her advantage and left the dough to do a slow second rise overnight on the kitchen counter. The next morning she loaded the bowl of risen dough back in the Mini, and returned to D.C. for Day 2.

Having missed the adventures on Day 1, Paula was eager to jump in. She cut the dough into three pieces and rubbed flour into the linen kitchen towel that would hold the baguettes for the final rise. We each rolled out a baguette shape and placed it on the towel, which was resting on a cookie sheet.

After setting the timer for two hours, we retreated to a little meal of delicacies Rayna had brought back from a recent trip to Italy—cheeses, meats, paté—and fruit. In the spirit of the French bread theme, we opened a bottle of Bordeaux that Paula had been saving for a special occasion like this, and waited patiently for the dough to rise. Hmmm, it was going awfully slowly, so we placed the pan in the warming drawer of the stove. The rising was still imperceptible, so Nanci phoned her friend Louis in Massachusetts, who had made the bread successfully years ago. He advised us to go ahead after three hours on the theory that it would certainly rise when it got into the heated oven. 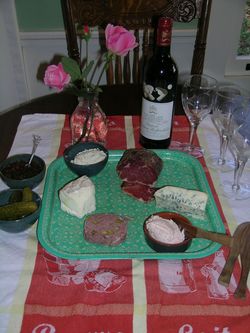 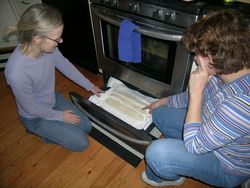 We took to our stations: with one of us reading aloud, we carefully moved each baguette to a board and a peel (a board with a handle used in making pizzas). We slashed the gluten cloak on each loaf with a razor blade, and misted the surface with water. Then we carefully moved the loaves into the 450-degree oven and onto the preheated pizza stone. 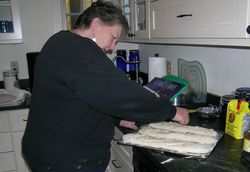 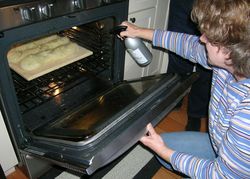 At three minutes we quickly sprayed the bread with water, per Julia’s instructions. At six minutes, the same treatment. At nine minutes, one more misting, which was followed by pacing through the kitchen, swooning over the intoxicating aroma of the baking bread, and peering into the oven’s window to see if the loaves were getting that beautiful brown top we were looking for. After 25 minutes, the loaves weren’t quite brown enough so we added another four minutes to the baking and then . . . perfection!

The recipe reader then discovered what everyone who cooks with Julia knows. She anticipates your thoughts and talks to you, lest you do something foolish. We were stopped in our tracks by this sentence: “Although bread is always exciting to eat fresh from the oven, it will have a much better taste when the inside is thoroughly cool and has composed itself.” She advised waiting 2 to 3 hours! 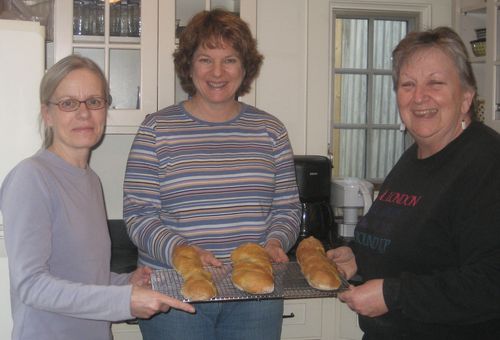 With supreme willpower we decided to follow Julia’s wisdom. Rayna’s loaf lay glistening on her kitchen counter. Nanci nestled hers in the Mini for the trip home, and Paula arranged hers on the passenger seat for the hour’s drive to southern Maryland. Once in the door, the phone rang and, without so much as a “hello,” it was Rayna crowing, “The secret is in the misting!” None of the loaves lasted long, which is what French bread is all about. It’s meant to be eaten the day it’s baked and these loaves were nothing short of magnificent.

We invite you to join with us in this celebration of Julia Child’s life, work, and contributions to American culinary history. Please share your experiences making Julia Child’s recipes by posting your story, photos, or video on our Tumblr page for this recipe series.