Sitting in with history

When I applied to become an intern at the National Museum of American History, I honestly was not sure what to expect, so I decided to assume that my time in Washington would be spent in a dark office, far away from the bustle of the city. My assumption was pretty far off.

The first couple of weeks of my internship were filled with exciting adventures that I’m sure aren’t part of the standard intern agenda. One such adventure was a visit to the House of Representatives Page School at the Library of Congress. 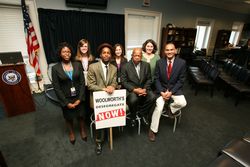 As an intern in the Office of Public Programs, I am involved with the brilliant daily programs here at the museum such as the award-winning historic theater program, Join the Student Sit-Ins at the Greensboro Lunch Counter. If you have never experienced the sit-ins, I advise that you stop by one weekend and do so. This awesome program invites viewers to take part in a non-violent sit-in training session like those held by the Student Nonviolent Coordinating Committee (SNCC) in the 1960s. In fact, the program script is based on the actual SNCC training manuals and the recollections of those men and women who participated in the Civil Rights Movement. The sit-in program began running last November when the museum reopened, and has been seen by thousands of visitors since then.

I was fortunate enough to be able to go to the Page School with members of the creative team to set up the performance for the students. It was my first visit to the Library of Congress, and being the bibliophile that I am, I was filled with excitement just being in such a beautiful library. I was very impressed by the Page School and the exceptional students that I’m sure will be running this country in a couple of decades. These teenagers, generations removed from the brutality of segregation, were visibly upset at the very idea that such inequality existed in America, and appeared more personally engaged than many of the adults that see the program at the museum. 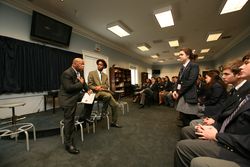 The highlight of the morning came when Congressman John Lewis accepted the invitation to speak to the students about his involvement in the civil rights movement. Congressman Lewis is a Representative from my home state of Georgia, and participated in student sit-ins in Nashville in the 1960s. As a representative of SNCC, he was the youngest speaker at the March on Washington in 1963, and the only one still alive today. In one glance from the window at the top of the Jefferson Building, we could look out and see the Lincoln Memorial where Congressman Lewis took a stand against racial discrimination, and the Capitol building where, because of the civil rights movement, he is now able to serve. It was remarkable to be able to stand with a living figure of history and reflect on the changes that those brave students helped make possible.

February 1, 2010 will mark the 50th anniversary of the Greensboro student sit-ins that inspired Join the Student Sit-Ins. To celebrate, the museum  is hosting a series of programs and events that will begin Martin Luther King, Jr. weekend and run through the month of February. Stay up to date with what’ll be happening by visiting our events calendar. I hope to see you at the lunch counter!

Editor's note: Did you know you can subscribe to our events calendar by email or RSS? Sign up and you'll be informed of upcoming curator talks, performances, and family festivals!